This National Park of 150.612 hectares, located in the very south of Chile, in Tierra del Fuego, was only opened in December 2013. In the east, it borders the Argentine Tierra del Fuego National Park; together, the two parks are called Parque para la Paz (“Park for Peace“).
Yendegaia’s breathtaking landscape includes trees like Antarctic beeches, coigüe, canelo and the Chilean firetree notro, extensive grassland, a rugged coast, fast-flowing rivers, sublime mountains, lakes, glaciers, and also thickets and herbs able to resist the windy climate conditions, heavy rainfalls and low temperatures. From June to September, temperatures can get as low as 11 degrees below zero, but in summer they reach up to 24°C.
Besides the 128 vascular plant species, 49 bird species and other animals – some of them in danger of extinction, e.g. the Andean fox, the Southern river otter and the ruddy-headed goose – have to cope with that climate. Other animals living there are leopard seals, elephant seals and kelp gulls.
The aim of the National Park is to conserve biodiversity and to boost tourism in the areas of adventure, outdoor, special interests and ecotourism. As it was only founded in 2013, there aren’t any official trails yet, but you can explore the area via numerous non-official trails starting from any point of the Y-85 road, from Fagnago Lake, or by boat from Puerto Williams. Also, a road from Vicunya to Yendegaia is being built and will probably be finished by 2021. 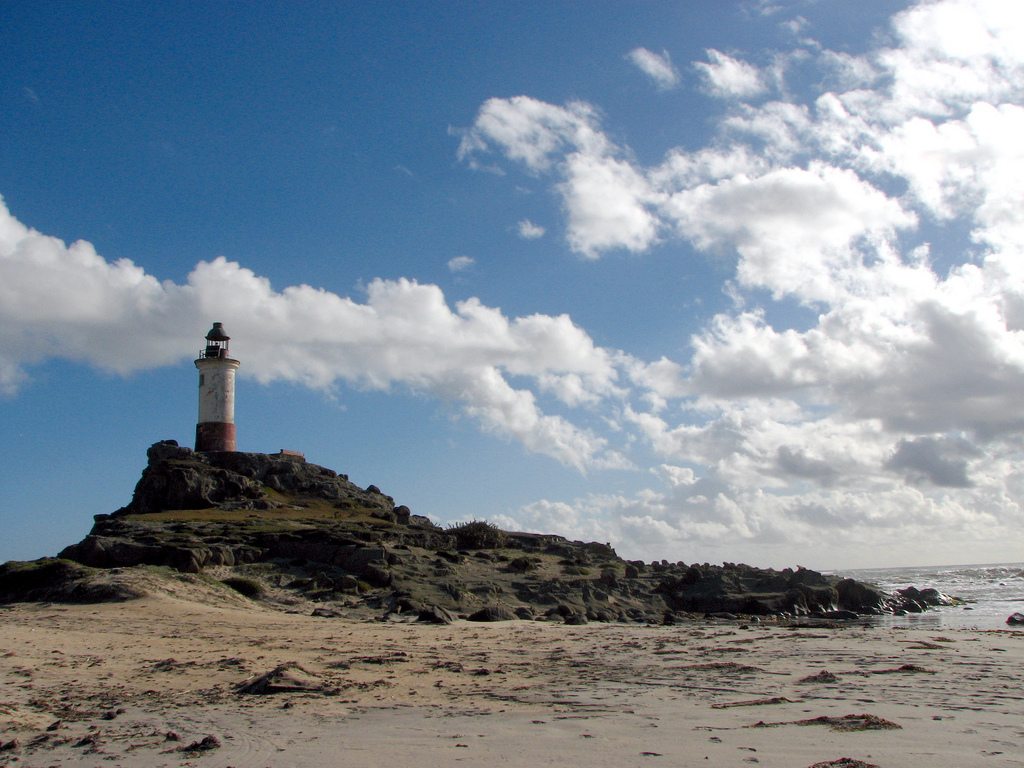 
To get to this 48 km² island belonging to the Bío-Bío Region, you have to take a boat or a helicopter in Tirúa, which is 34 km away and the closest city on land.
The center of the island has been declared a nature reserve by the CONAF thanks to the forests housing the Chilean myrtle, Lenga beeches and the Chilean ulmo Olivillo, partly on a small mountain chain reaching up to 390 meters in height. On the “Sendero Camino Nuevo“, a walking trail of 1.5 hours, you can also spot some animals, such as chucao birds, pink-footed shearwaters and the rodent Pacific degu, which is endemic to Isla Mocha and critically endangered. Another animal of interest, although dead since almost two centuries ago, is Mocha Dick, the whale that inspired Herman Melville for his famous novel Moby Dick and which contributed to the more than 100 ship wrecks around Isla Mocha.
On its long sandy beaches, fishers share the coast with windsurfers, sailors and other people simply enjoying an easy walk along the Pacific Ocean.
At 15-30°C, it is more relaxing going there in the summer, as in winter temperatures fluctuate between only 10 and 15°C and there can always be a lot of rain. There aren’t any ATMs either on the island nor in Tirúa, so it is important to bring enough cash. Also, there is only one hotel on the whole island. However, the people there are happy to let tourists stay with them, or you can take your chances and camp somewhere in the wilderness. 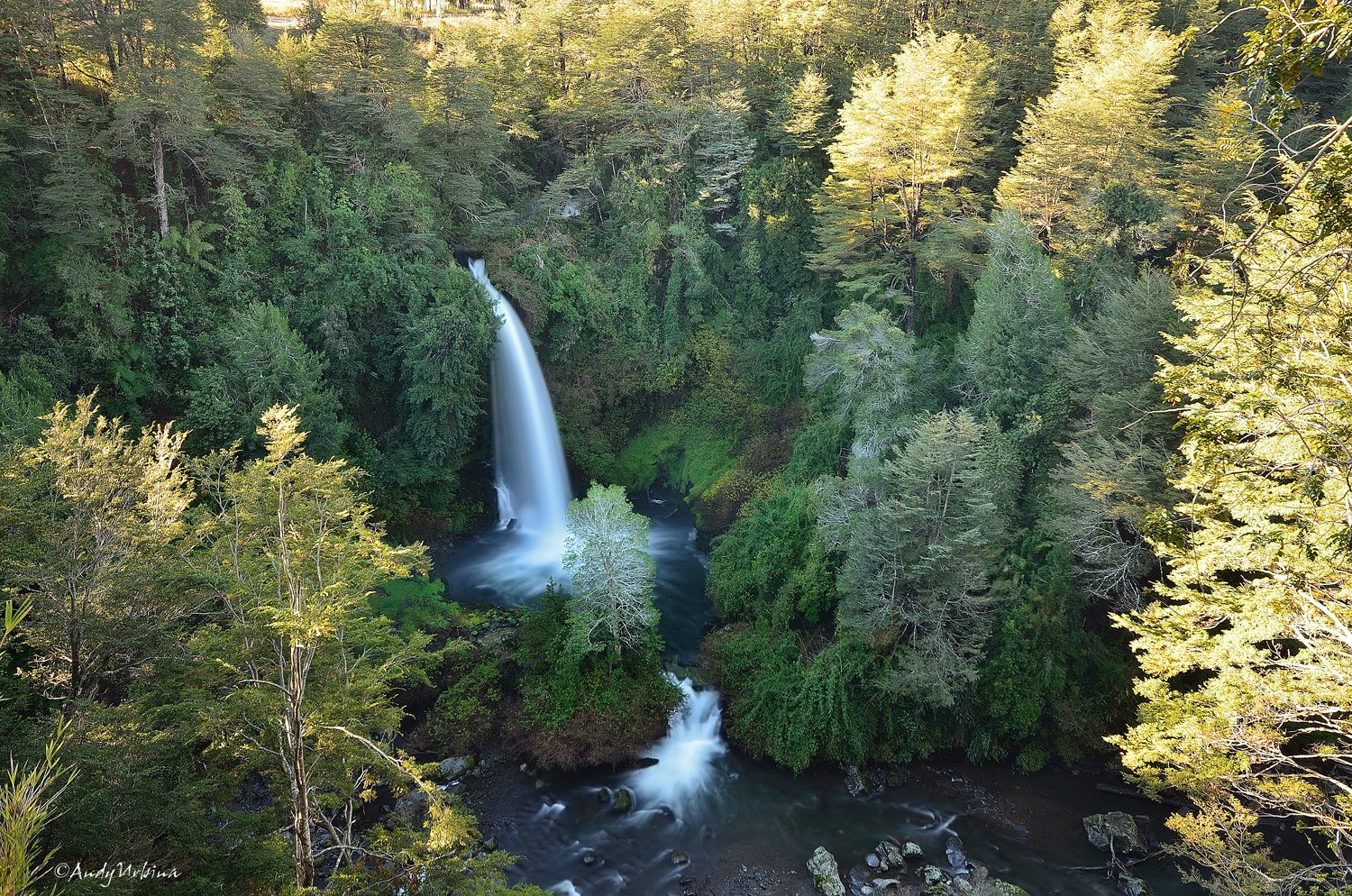 In the Araucania Region, 14 km from Curacautín city and at an altitude of 719m, the stunning, 20m high waterfall Salto del Indio awaits you.
Even though the waterfall’s visibility is limited by forests, you can get still amazing views of it from the many viewpoints around. There are also tracks leading down to the very base of the waterfall, which is the intersection of the rivers Indio and Cautín, the first of these being the one that ends there and becomes the Salto del Indio. According to an ancient legend, the waterfall was created when the Indian boy Cayú jumped off into Cautín river because he could not be together with his love Millaray, Princess of Araucania.
The waterfall is part of the 12 hectare Senderos del Indio Park that offers restaurants, huts, a hostel, handicrafts, viewpoints and a mini farm in a fascinating landscape shaped by volcanic sediments from Lonquimay volcano. 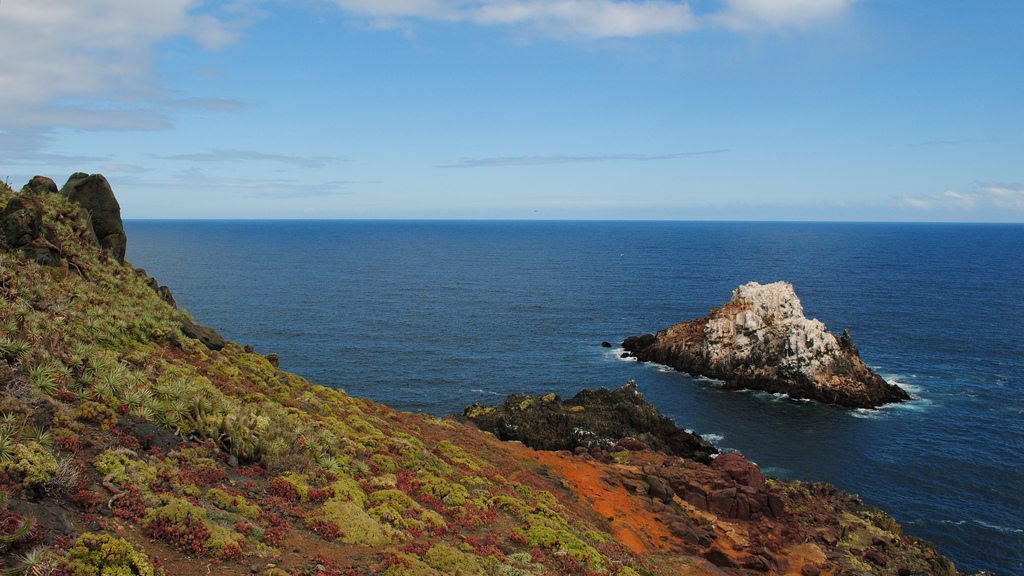 The small coastal town Los Molles in the Valparaíso Region, only 8km away from the Coquimbo Region, provides the perfect place for a relaxing holiday.
Although the town is more than prepared for tourists, – for example, there are 678 houses, but only 636 inhabitants – it is a calm area with sea view restaurants, white sand beaches, fantastic sunsets, camping possibilities and adventure tourism offers like diving or cove exploring.
Besides tourism, agricultural food, craftmanship, fishing and aquafarming plays a great role in the inhabitants’ lives.
130 of more than 300 plant species in Los Molles are endemic and many of them can be found in the Bioparque Puquén, for example the endangered Pouteria splendens and various cactus, the Alstromeria and water clovers. Also colocolo cats, marine otters and seals live there. Highlights include the paleontological deposits with crustace and and insect fossils, as well as a complex with subterranean caves and a so-called “cold geyser“.

Chañaral de Aceituno does not describe a town, but a cove in the municipality of Freirina, Atacama Region, two hours away from Vallenar.
The reason so many people come here is whales. During the summer, up to six different types of whales can be seen from this very spot.
Opposite the cove, you will find Isla Chañaral, part of the CONAF Pingüino de Humboldt National Reserve and home to many Humboldt Penguins. At certain times of year, you can also spot different groups of common bottlenose dolphins from here. 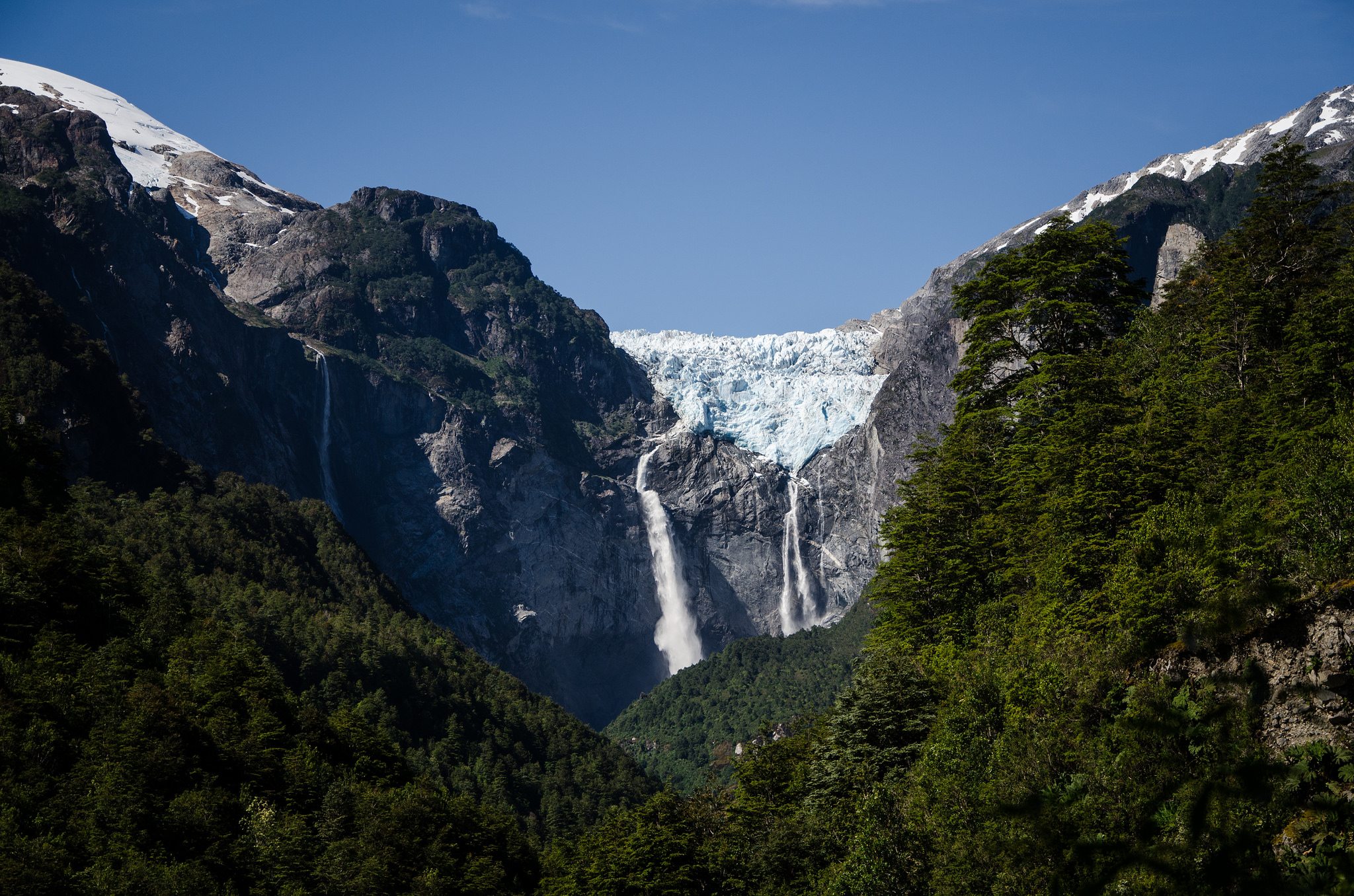 The name Ventisquero Colgante Queulat describes a “hanging snowdrift” with waterfalls of up to 293m in height, located inside the Queulat National Park in the Aysén del General Carlos Ibáñez del Campo Region in the south of Chile.
The Park borders the Cisner river to the south and the Lago Rosselot National Reserve to the west. Its area of 1541km² (595 mi²) covers glacier-capped mountains, virgin evergreen forests, lakes, lagoons, two small icefields and even a part of the Puyuhuapi Volcanic Group.
The Valdivian temperate rainforests’ trees include tepú, quila, chilco, nalca, coigüe de Magallanes and lenga. Alongside mammals like the pudú and kodkod, birds such as the chucao tapaculo, the Chilean pigeon, the Magellanic woodpecker, the thorn-tailed rayadito, the yellow-billed pintail and many more live in this area. 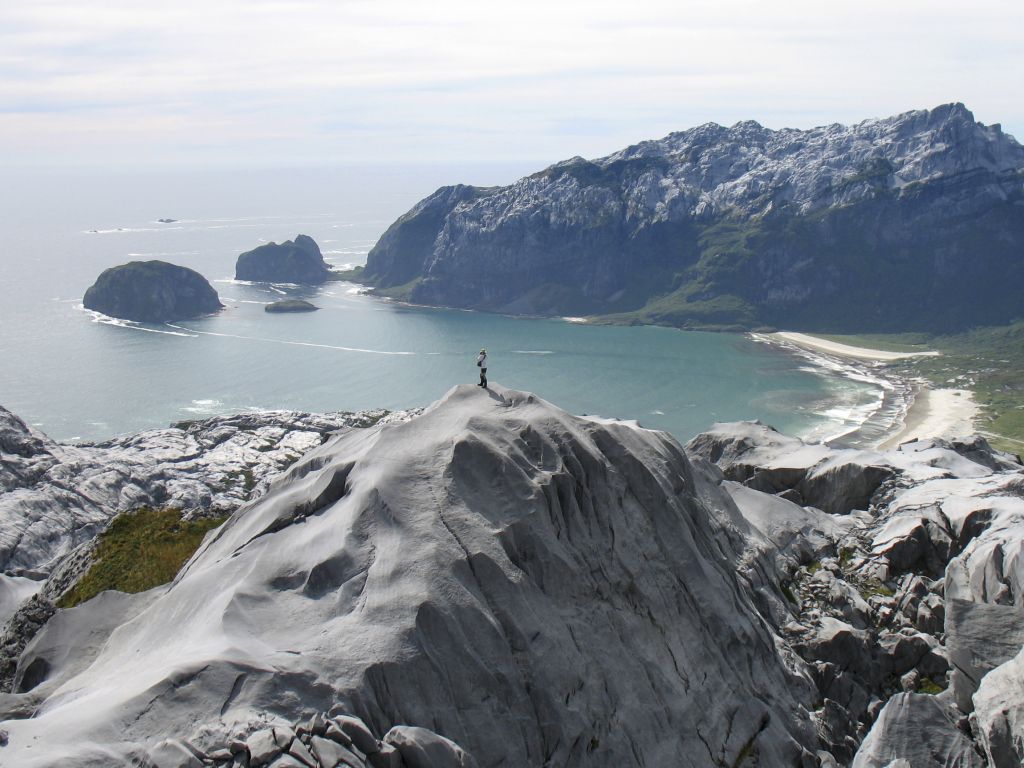 Just a one-day boat trip from Puerto Natales away, you will find the Madre de Dios Island, located in the Magallanes Region, not too far away from the Bernardo O’Higgins National Park. It is part of the Madre de Dios archipelago consisting of five islands, only one of them inhabited.
On the steep coasts of the 1043km² island, which is partly composed of limestone and was only declared a nature reserve in 2008, there are numerous natural caves created by the erosive combination of wind and tides. Some of them have been used by the Kaweskar people, who lived there from 6000 years ago until the 21th century, for different purposes like burial places or temporary camping. In 2006, the Cueva del Pacífico cave was discovered, and in it rock art and cave paintings. Another interesting one is the “Cave of the Whales“, where 2600-3500 year-old whale skeletons were found.
The landscape of the island was created at the same time as Chile’s coastal mountain range and the Andes, therefore it is of igneous rock origin and contains several mountains and native forests with trees like canelo and lenga.
Due to the rainy and cold climate – the average temperature is 9°C – the island can become dangerous, and so far has remained nearly unexplored. 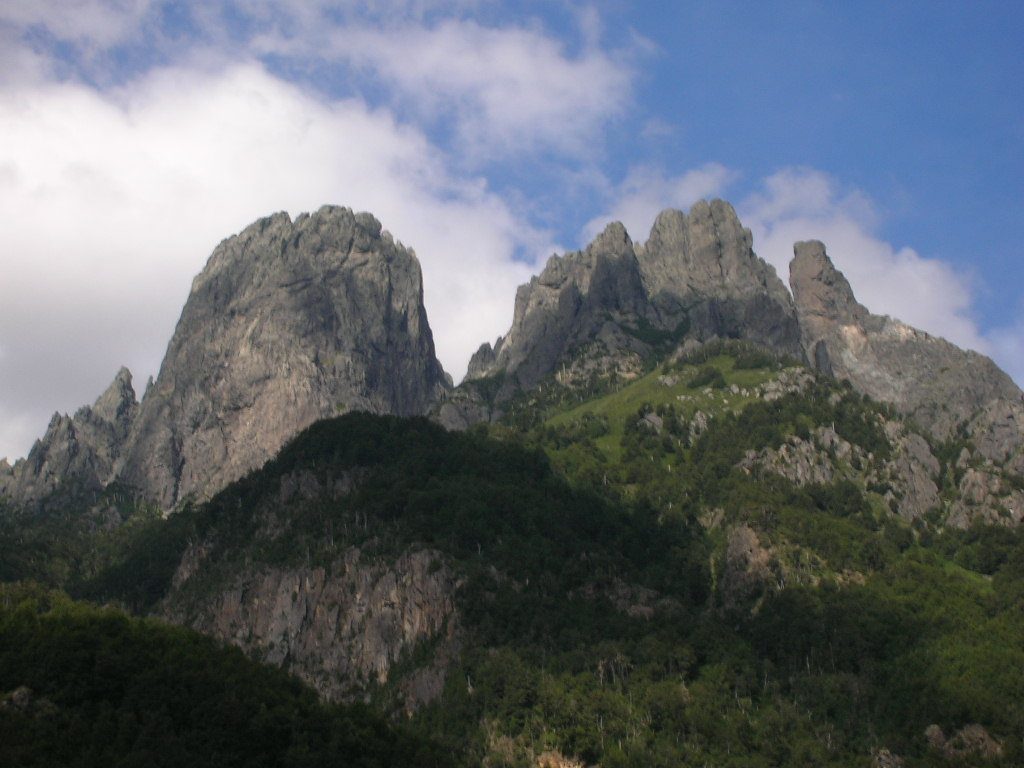 It was only in 2002 that this over 2000 meter high mountain of the Villarrica National Park in the Araucania Region was climbed for the first time. Since then, not many routes have been detected, but there is a six-hour trekking route and a ten-hour climbing route. However, these activities are only recommended for experienced and physically fit climbers.
The landscape around this mountain of volcanic origin presents the green, rugged valley of Trancura river, which is of glacier origin, where you can find trees like the raulí, the coigüe, the lenga and the araucaria.
To get there, you can either start at Tromen Lake, or at several points on the road to the Argentine border crossing point Mamuil Malal. 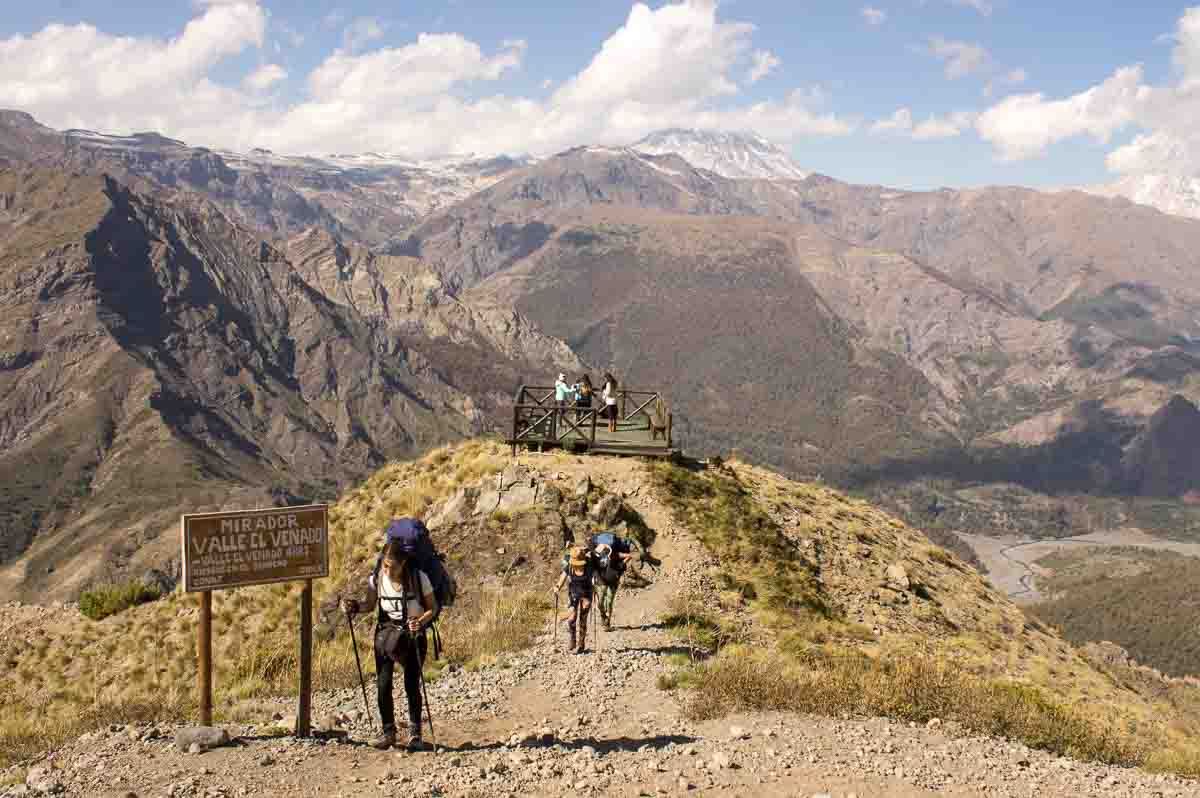 If you are in Santiago and wondering where to go, the 12.163 hectare (46.96 mi²) Altos del Lircay National Reserve is not too far away; only about 270km south in the Maule Region, close to the Andes, and the volcanoes Descabezado Grande and Cerro Azul.
Around the three main rivers in the reserve, Lircay, Blanquillo and Claro – the latter ending with a spectacular waterfall – grow the threatened two species Hualo, seven of the ten species of the Nothofagus trees occurring in Chile and also the ciprés de la Cordillera. One of the reserve’s purposes is to protect rare and threatened animals such as Tricahue parrots, Sapito Hermoso, the reptile Matuasto del Maule,  the lizard of Cristián, pudús, pumas, and meadowlarks.
The climate there is characterized by warm periods with some extended dry ones, but there can also be snow on the east side during winter and part of spring. The average temperature is at 14.7°C.
When going there, you will have to announce your visit to the Guardaparques Office at the entrance of the reserve and pay a small fee ($5000 CLP for foreign adults). If you want to stay overnight, it important keep in mind that pets, hunting, fishing and camping at the Enladrillado viewpoint or at lagoons of high altitude are prohibited. You have three options for the campsite: Antahuara (point 1), Los Carpinteros (point 6), Valle el Venado (point 10).

As well as horseback riding, there are several trekking routes ranging from 20 minute over 10 hour to 4 day walks. 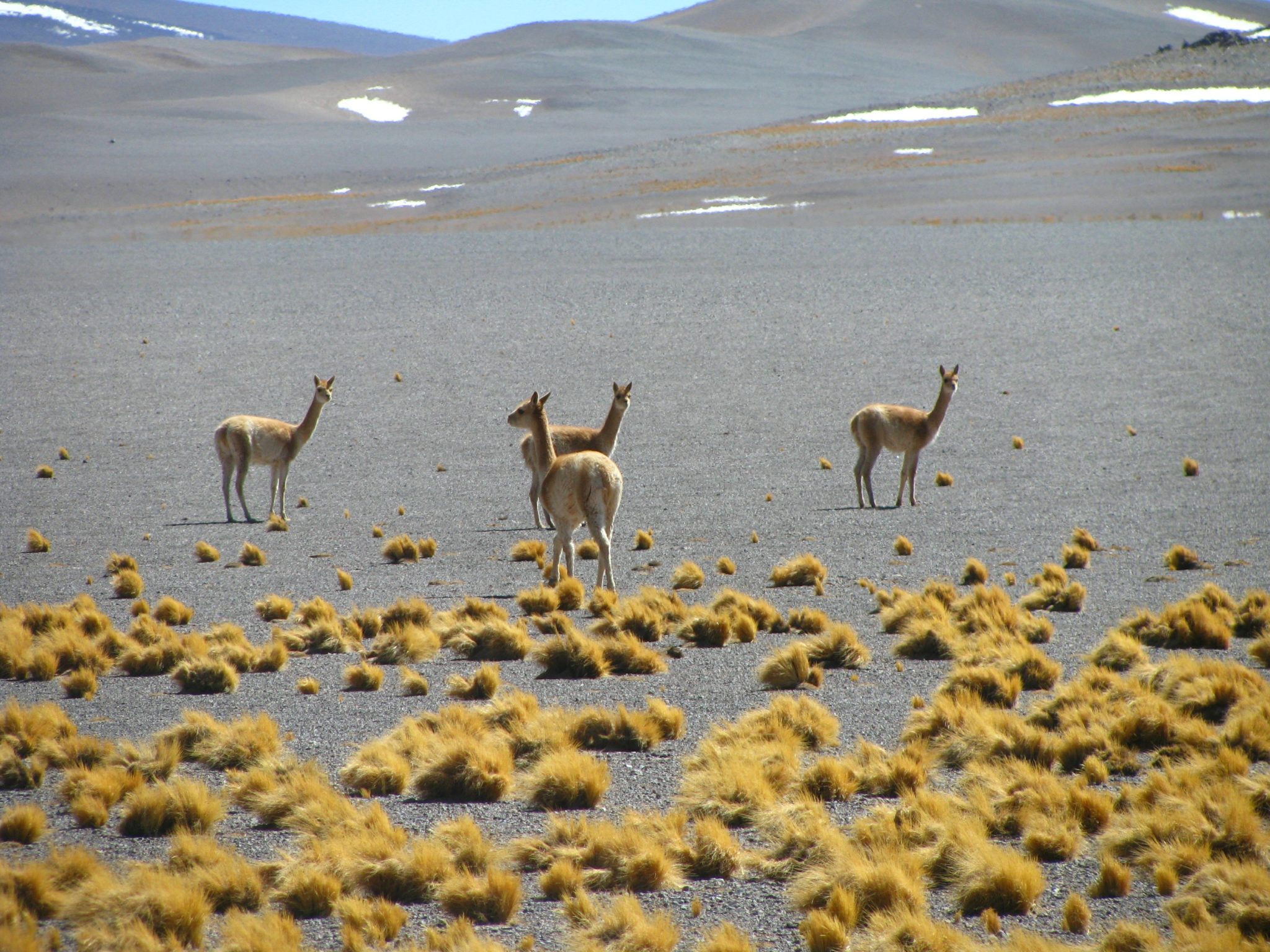 As part of the Nevado Tres Cruces National Park in the Atacama Region, about 160 km northeast of Copiapó and at an altitude of 3750 meters, the Maricunga Salt Flat extends over an area of 80 km².
This salt flat once used to be a lake, but with time the water evaporated and, as it is located between two mountain ranges (Claudio Gay and Domeyko) and does not have any access to the sea, the salt remained in the basin.
77 animal species, 65 fauna species and many flamingoes live in the Salar’s desert climate with an average high of 18.4°C and an average low of 4.5°C. As it can be difficult to get there in winter, the Park is only opened from October until April.
Other places of interest inside the Nevado Tres Cruces National Park are the Santa Rosa Lagoon, also in the north, and the Negro Francisco Lagoon in the south of the Park, which is less high than the north.
In this area close to the Argentine border, there is also Chile’s highest mountain peak, which belongs to the Nevado Ojos del Salado volcano, the highest active volcano in the world. Other volcanoes in the salt flat’s surroundings are the Incahuasi, the San Francisco, the Tres Cruces, and many more.