In a region as vast and rich in natural wonder as Patagonia, it can be hard to know what sites to prioritize for your visit. Everything is beautiful in its own way, from the mountains to the glaciers to the plains, so how do you choose? What are the must-see, can’ miss places? Well, in our opinion, if you want to see and experience the best of what Patagonia has to offer, you can’t go wrong with these six must-visit places in Patagonia! 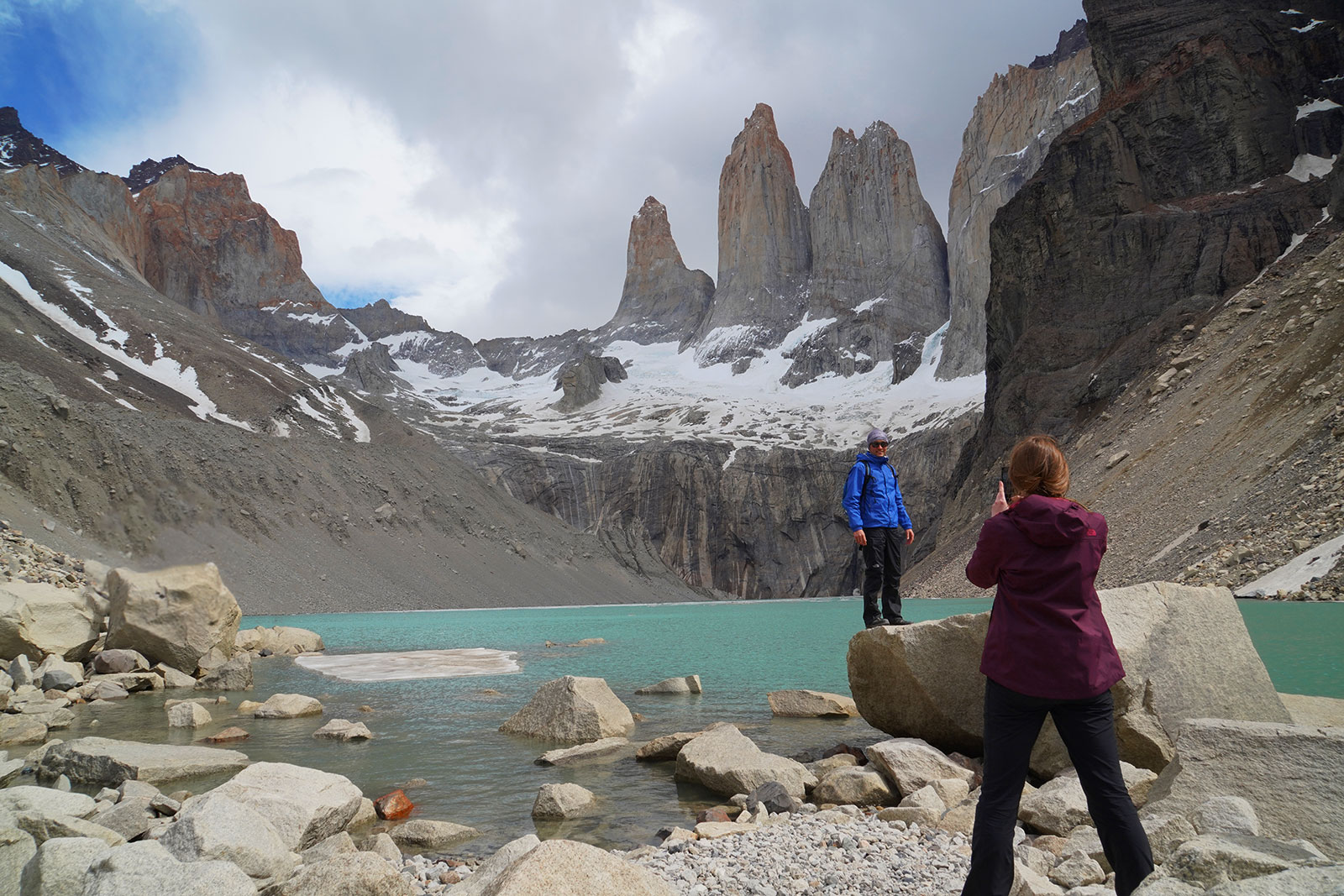 Base of the Torres

One of the most popular and well-known hikes and viewpoints in Torres del Paine National Park, the Torres are the three granite spires for which the park is named. Rising up from the middle of the Paine Massif, with a vividly-electric turquoise lake at their base, reaching this iconic view requires a full day hike, starting from near the Las Torres Hotel and then climbing up and into the mountains via the “Paso del Viento” or Pass of the Winds. After hiking through a forest on the Ascencio valley floor, the final push comes when you climb up a rocky glacial moraine. But at the top is one of the most spectacular views anywhere in Patagonia: three pillars of rock, shaped by wind and ice, standing stark against the sky, with the lake below. Sit back, relax, and enjoy the view before climbing back down. 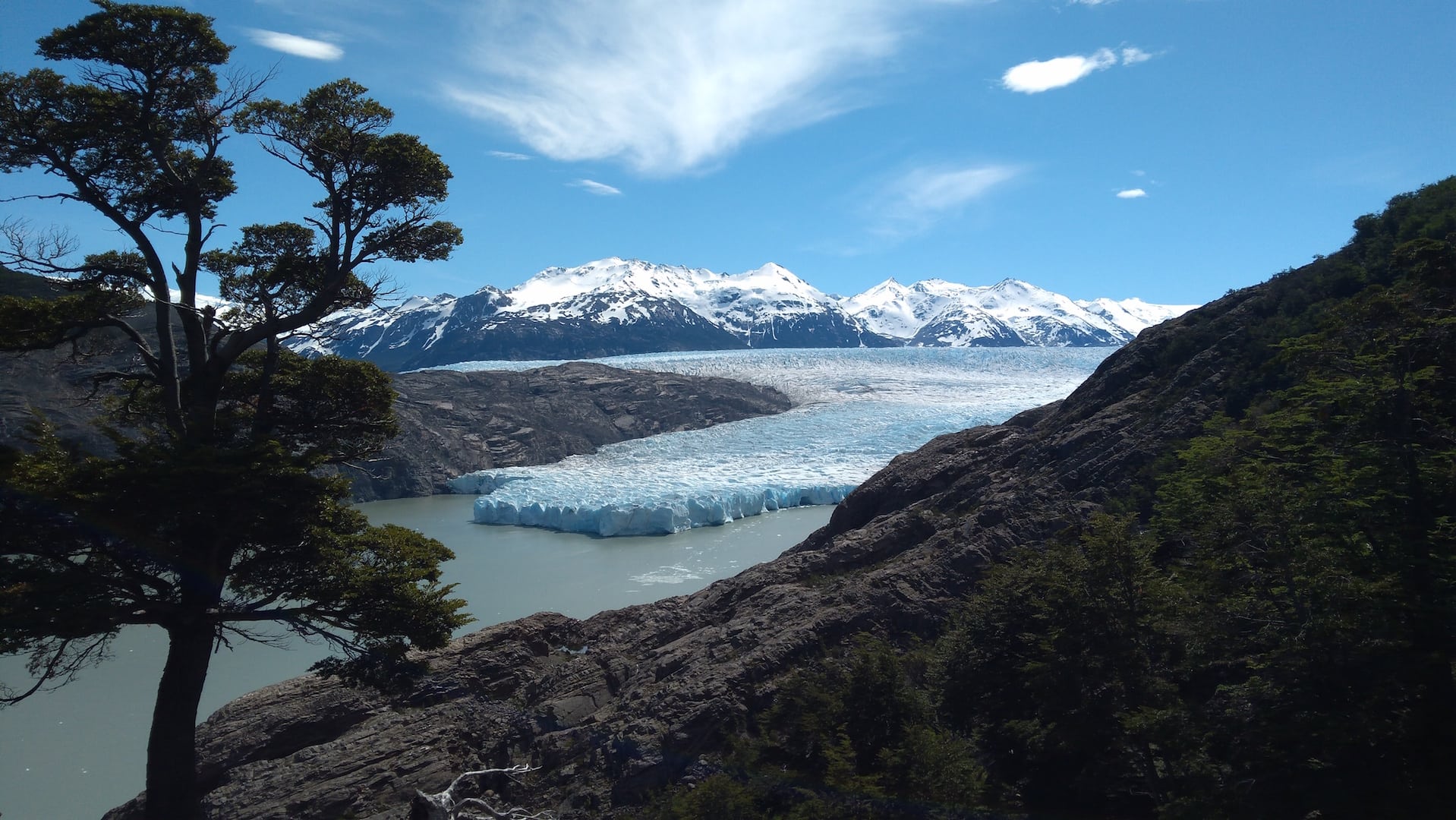 Another of the most popular attractions in Torres del Paine National Park is the Grey Glacier. Located on the western end of the Paine Massif, the front wall of the glacier towers over a hundred feet high, and frequent calvings litter Grey Lake with fantastically shaped icebergs in unbelievable hues of blue and white. The Grey Glacier flows out from the Southern Patagonia Icefield and, upon reaching its terminus in Grey Lake, is split by a small island in the middle of the lake. Boats and catamaran tours are able to get up close to the front wall, but you can also kayak on the lake as well (but at a safe distance from any icebergs or waves caused by calvings) and even go on ice-hikes on the glacier itself! An amazing feat of time and nature, the size and might of Grey Glacier has to be seen to be believed. 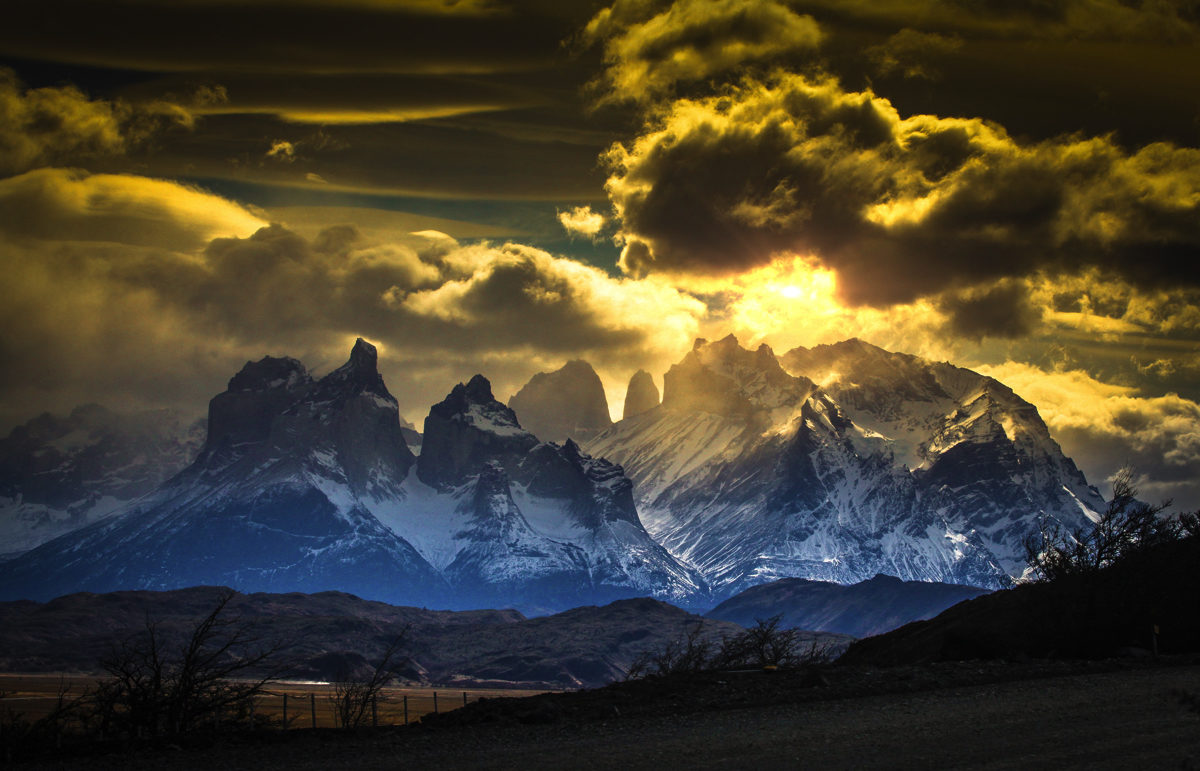 The Paine Massif (also known as the Paine Cordillera) is the mountain group that makes up the centerpiece of Torres del Paine National Park. Made of granite and other rocks that have been molded by the movements of glaciers and Patagonia’s intense weather for centuries, what’s been left are impressively-shaped mountains like the Torres or the Cuernos (The Horns), two mountain peaks of light and dark rock that stand prominently at the front of the massif and are one of the park’s most recognizable landmarks. In the interior of the massif, the French Valley also features astonishing rock formations like the Sword and the Shark Fin. At all points along the W Trek and while driving around the park, you can admire the massif’s many different mountains and rock forms from all angles, each more impressive than the last. An especially good viewpoint is the Mirador Cuernos, located near the Pehoe Lake catamaran launch, and which looks upon the Cuernos and the front of the massif. 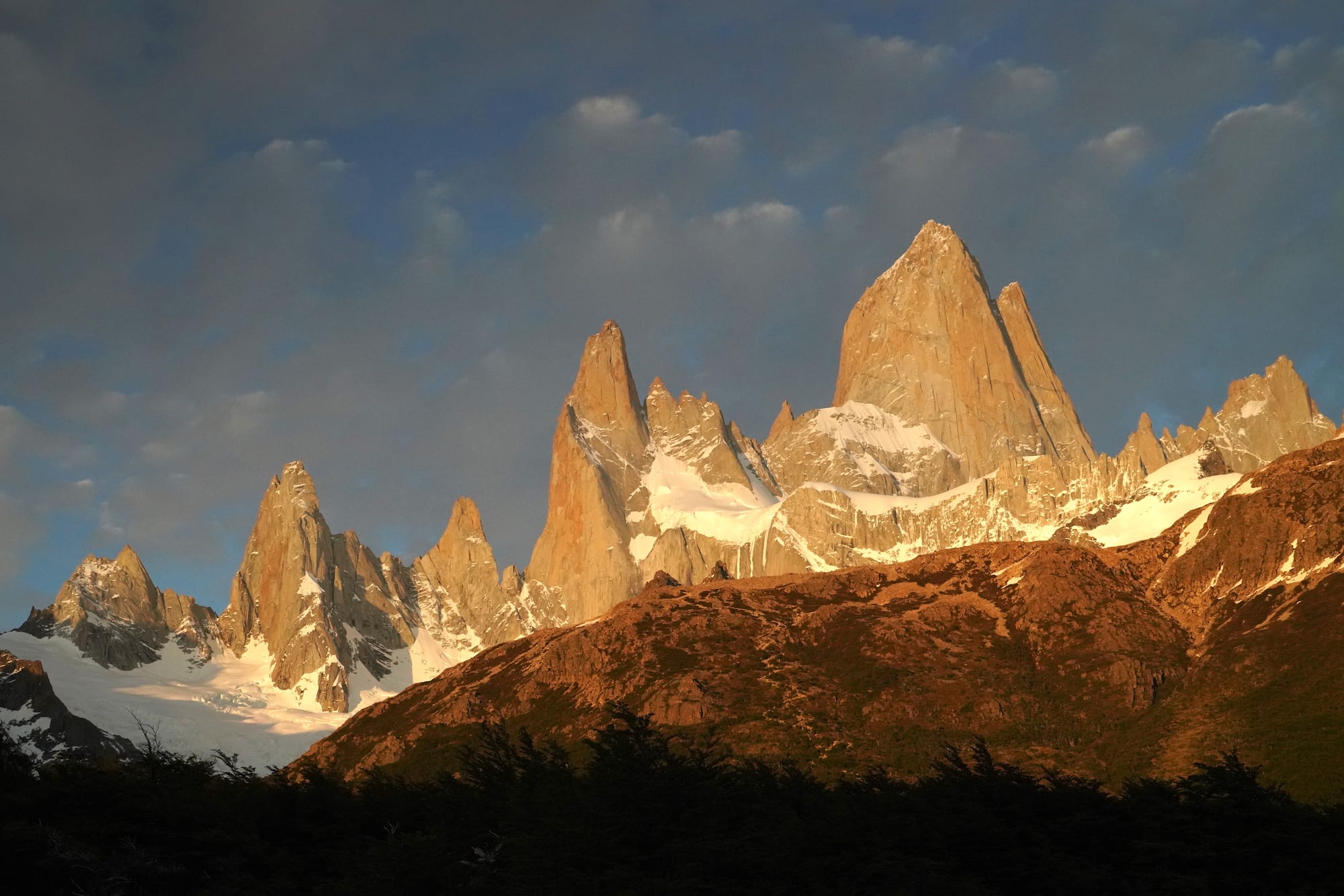 The crown jewel of Argentine Patagonia’s Los Glaciares National Park, you’ll likely recognize Mount Fitz Roy’s iconic shape from the logo of the clothing company that bears the region’s name. Yep, that’s right: the mountain on the Patagonia logo is none other than Mount Fitz Roy. Rising to a prominence of more than 6,000 feet, this cathedral of rock and snow can be admired on several different treks around the park, including the Fitz Roy and Cerro Torre Circuit (which reaches an elevated viewpoint of the two mountains and the glacial lakes at their base), and the Mount Fitz Roy Trek, which leads to the shores of the aquamarine Laguna de los Tres in front of the mountain. Fitz Roy is also a treasure in the mountain and rock climbing communities and has been scaled by the likes of Alex Honnold, Dean Potter, Yvon Chouinard, and Douglas Tompkins, 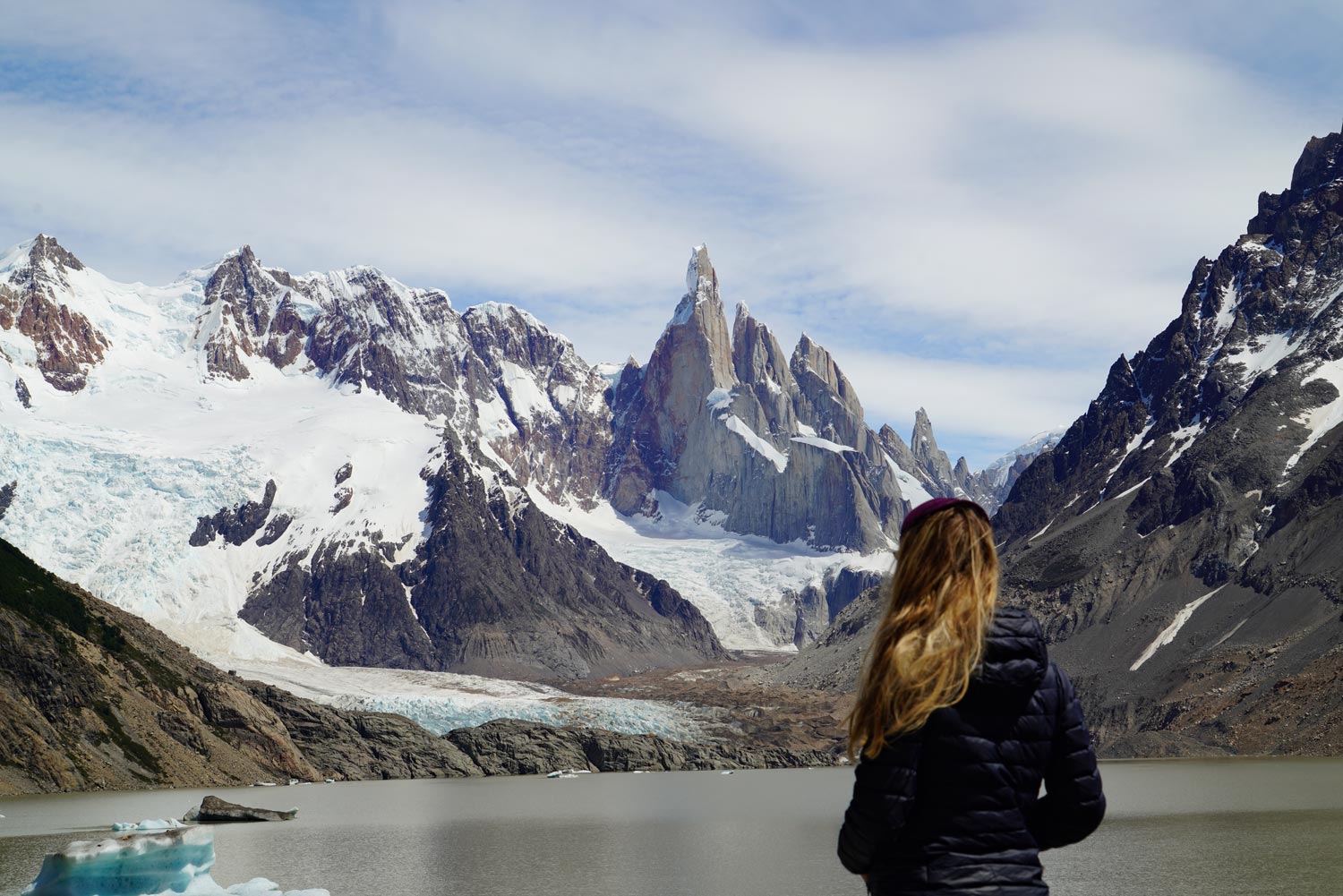 The other famous (or infamous) mountain in Los Glaciares, Cerro Torre is a jagged cluster of granite spikes that pierces the skyline like a crown. Comprised of several mountains, with Cerro Torre being the most prominent, its 4,000-foot peak is often covered in rime ice blown by high-powered winds. Cerro Torre has gained a certain reputation in the rock climbing community, as doubt has been shed on whether the first person who claimed to have summited it, Cesare Maestri, actually did so. Ever since, due to the high winds, weather, and technical difficulty, Cerro Torre is only attempted by the most experienced of climbers and even then has claimed a fair number of lives. For the rest of us, we can content ourselves with views of the mountain from the ground, such as one of the most popular viewpoints at the edge of Torre Lake. 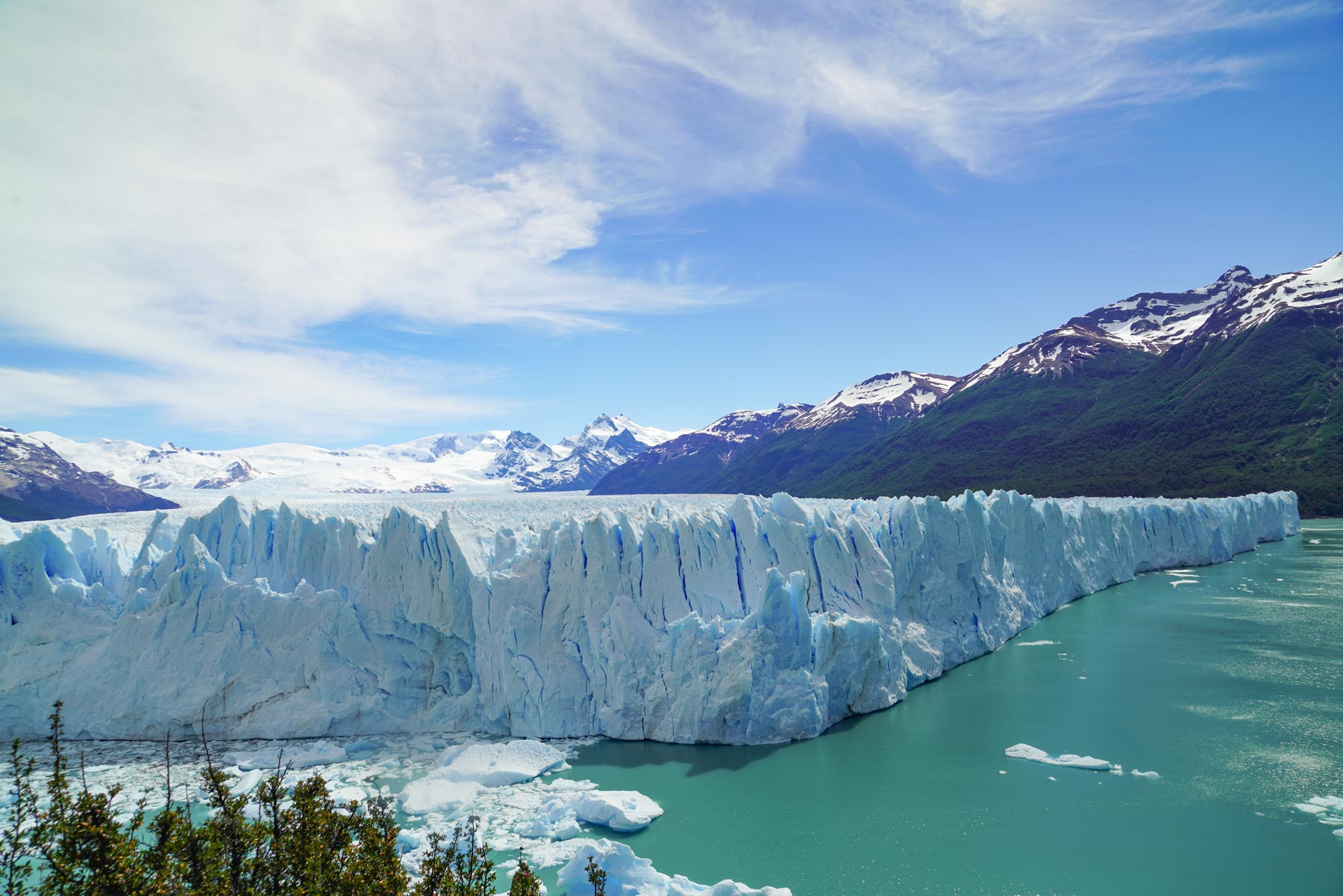 Arguably the most jaw-dropping of all of Patagonia’s glaciers, this icy behemoth has become famous for its staggering height (240 feet) and frequent calvings, making it a popular stop for those hoping to see icebergs fall from its front wall. Covering 97 square miles and stretching 19 miles in length from its origins in the Southern Patagonia Ice Field to its terminus in Lake Argentina, the glaciers’ proximity to land makes it easy to visit viewpoints right up close to the front wall, as well as go boating along the front wall. The glacier’s stability also makes it possible to go on ice hikes along the top, and some tours even allow you to finish the hikes with whiskey served on glacial ice! In addition to its size, its colors are also part of its splendor: every shade of blue and white blends and swirls together into a natural masterpiece that puts painters to shame.