Off the beaten track activities on Easter Island

Without a doubt, Easter Island is a bucket-list destination: seeing those giant Moai statues with your own eyes, hiking up volcanoes, learning traditional dances, dining on island cuisine, and lounging on coral sand beaches while listening to the waves. Even though Easter Island is only 63 square miles, there’s a ton of things to do packed into such a small space. Here are the Off the beaten track activities on Easter Island! 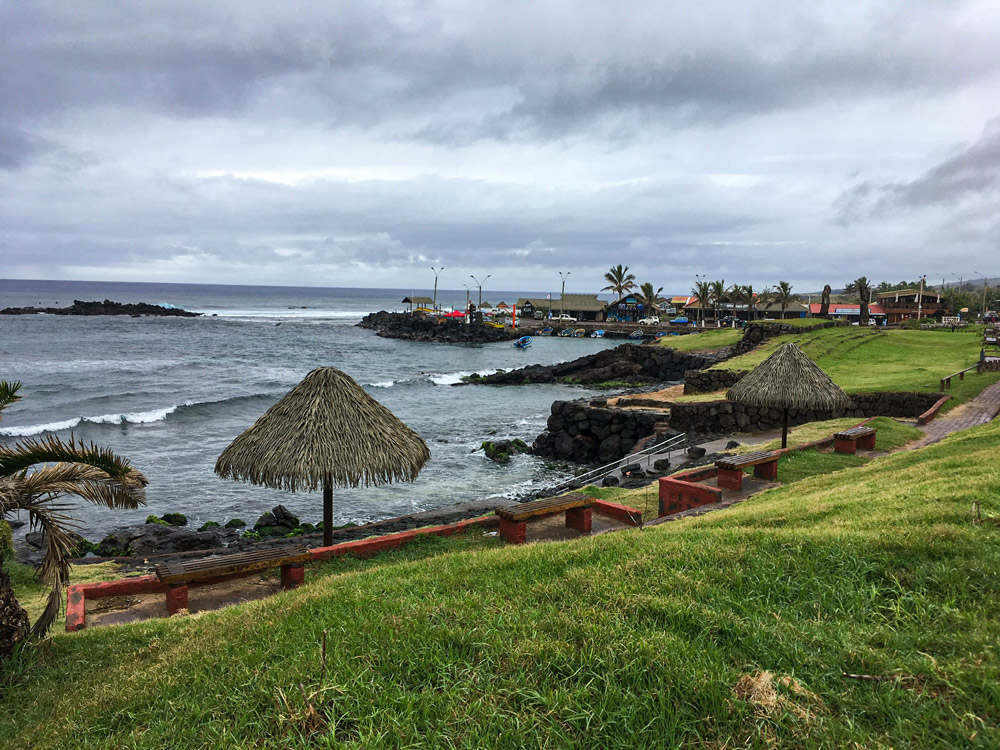 Hanga Roa – Before the Europeans came to Easter Island, the Rapa Nui islanders lived spread out all over the island. But now, everything is centralized in the main town of Hanga Roa. Located on the island’s western coast, here is where you’ll be based during your visit: the airport is just outside of town, all the hotels and accommodations are here, tours depart from here, and most of the best restaurants and stores are located here as well. Hanga Roa is also the only place on the island you can get WiFi. 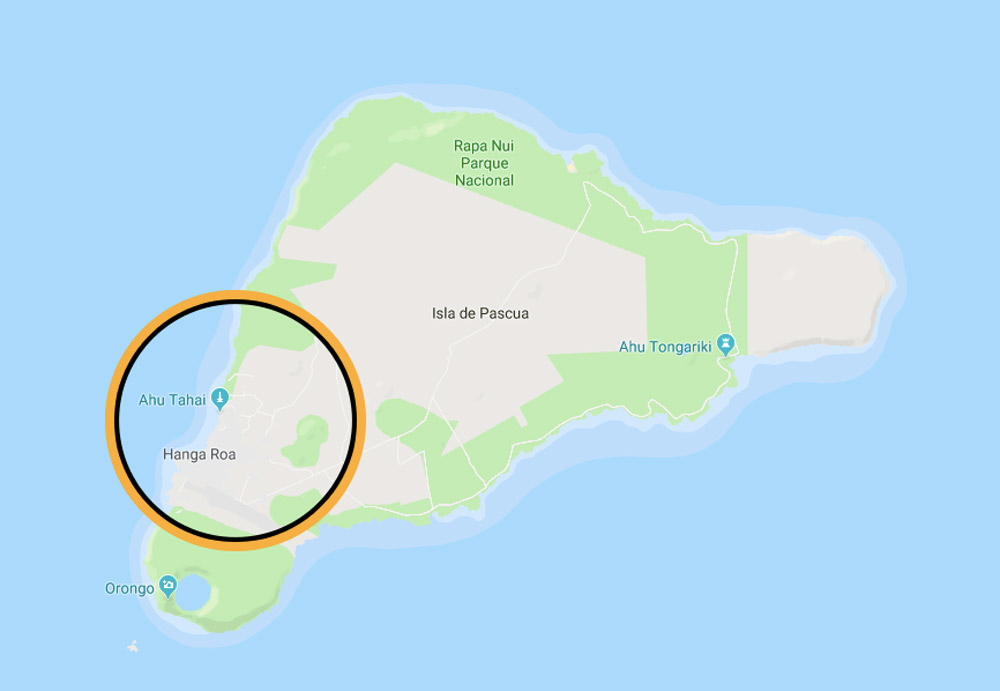 Meaning “wide bay” in the native language, it’s a charming town of just over 3,000 that’s easy to navigate on your own and a great place to experience how historic and modern Rapa Nui have come together to coexist (check out the graveyard to see how Christian and Rapa Nui beliefs and iconography blended; looking out over the ocean, the graveyard is a fascinating blend of crosses and Moai). 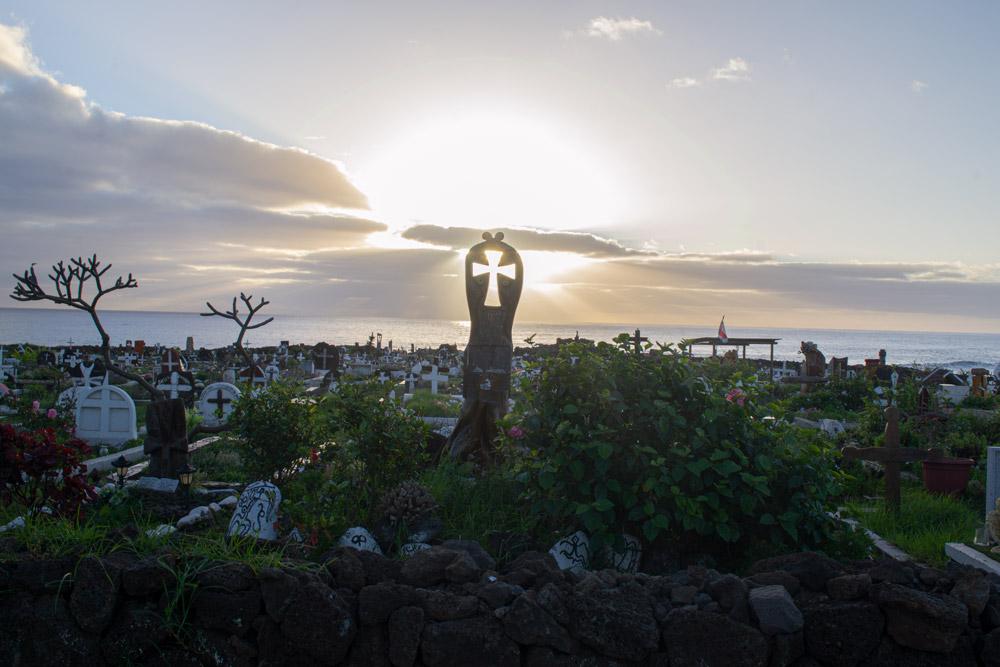 In addition to exploring the rest of the island, it’s a good idea to set aside a day or two just to get to know Hanga Roa, as there’s plenty to do and see. By the oceanfront, you can walk along Pea Beach, a scenic strip of white beach where you can soak up the sunshine, look at native flora, and even catch a few waves in the sheltered harbor. 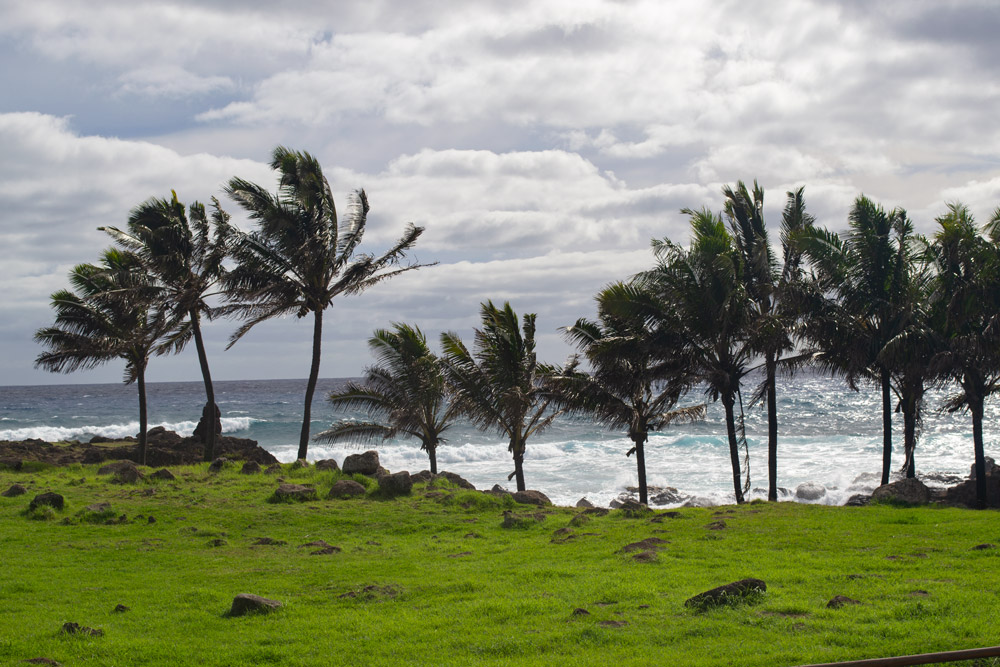 Further along the coast, you’ll also find the stately Ahu Tahai and Ahu Ko Te Riku, two beautifully preserved examples of classic ahus (a large stone platform with Moai arranged in a row along the top) and Moai (you’ve likely seen pictures of Ko Te Riku, with its singular Moai staring with its wide, white-painted eyes). You can also visit the fishing port, enjoy some of the island’s best food at spots like La Kaleta, Te Moai Sunset, and Haka Honu, and be wowed by traditional Rapa Nui dances and music at Kari Kari, 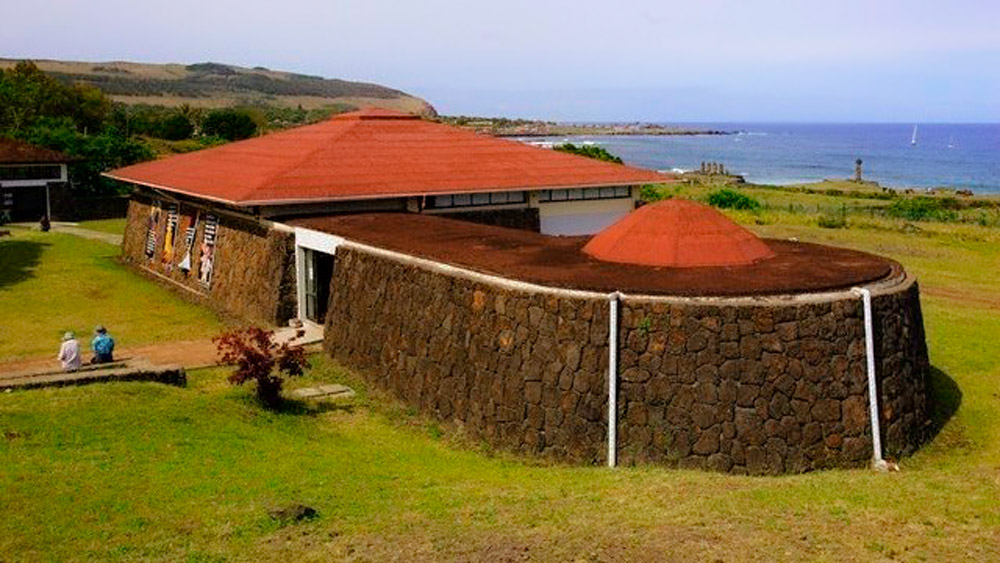 The only museum on the island, it’s named after Sebastian Englert, a German priest who came to Easter Island in 1935 and then dedicated the rest of his life to understanding, documenting and preserving Easter Island’s culture. The museum represents his life’s work: a collection of more than 15,000 artifacts including tablets of Rongo Rongo writing, a rare example of a female Moai, a reconstructed Moai eye, stone tools, and more. Information about the collection and overall Rapa Nui history and culture is available in English, French, German, and Japanese. For a more in-depth look into the island’s history and customs, this is a must-visit. 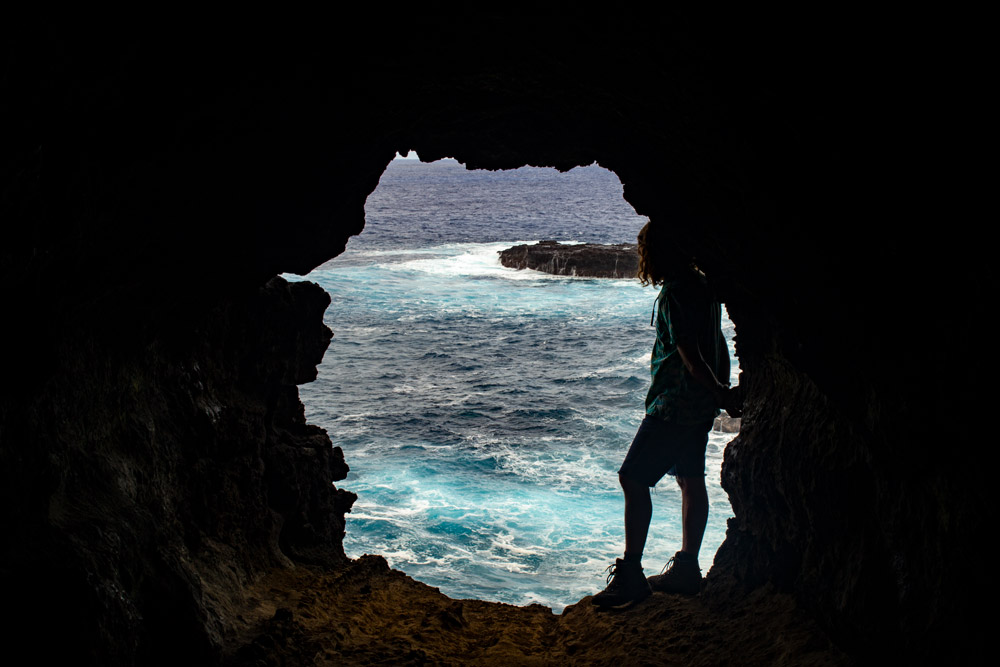 Ana Kakenga – Known as “the cave of two windows”, this ocean-front cave is famous for its rock-framed views of the Pacific Ocean, but the cave itself – a volcanic tube that was once used as a shelter by different Easter Island tribes – actually is rumored to have a tragic past. It’s said that the cave was the final refuge for a pair of young lovers who, fearing retribution for their forbidden love by their respective tribes, hid there as a last resort. 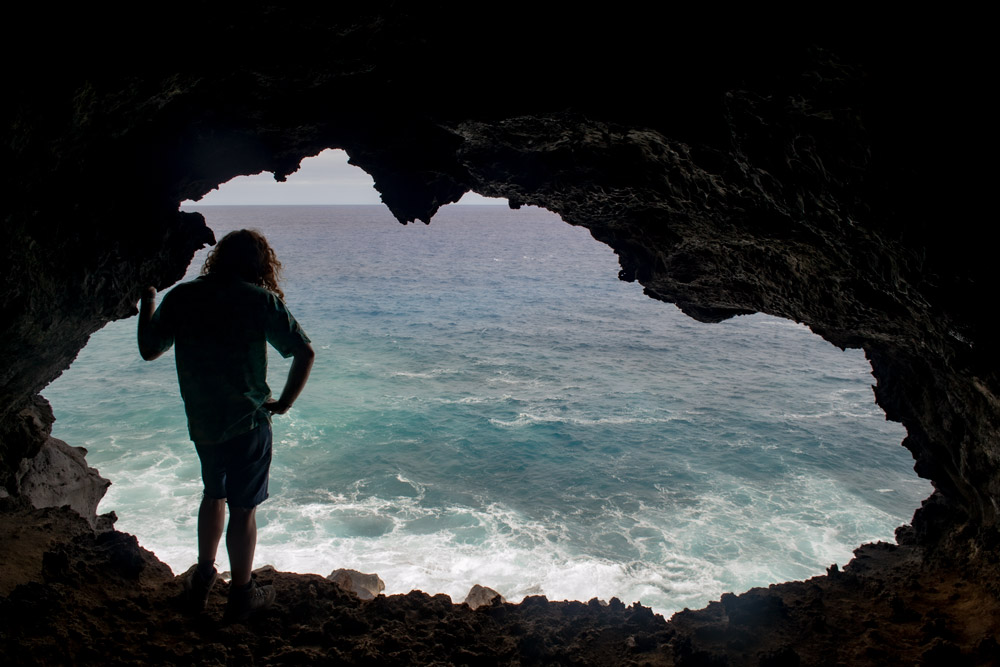 But it’s easy to see why they would choose this cave as their final place to be together: after climbing down through the opening in the ground that leads into the subterranean cave, you can see the ocean through two rock “windows”, each located down a different passage. With the sound of the waves crashing on the rocks and the picturesque ocean view, it’s quite romantic and makes for a great snapshot. 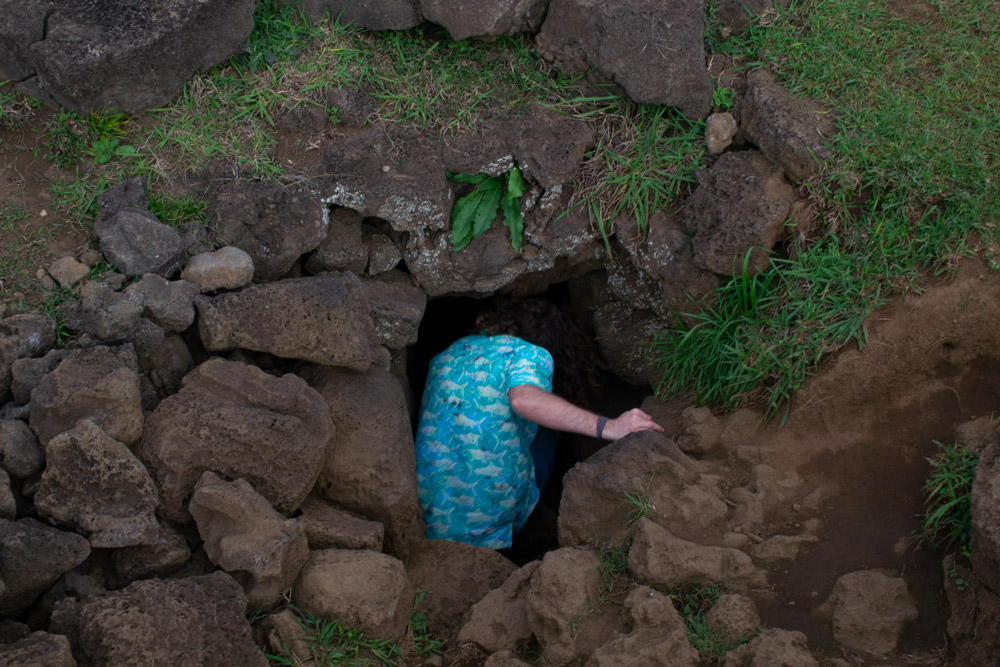 While open to the public, it’s recommended that you visit Ana Kakenga with a guide, because the entrance (a small hole in the ground) can be difficult to find on one’s own as there’s no signage. A narrow opening that requires a tight squeeze to get through, it’s easier with a guide to direct you and also help you navigate the cave. 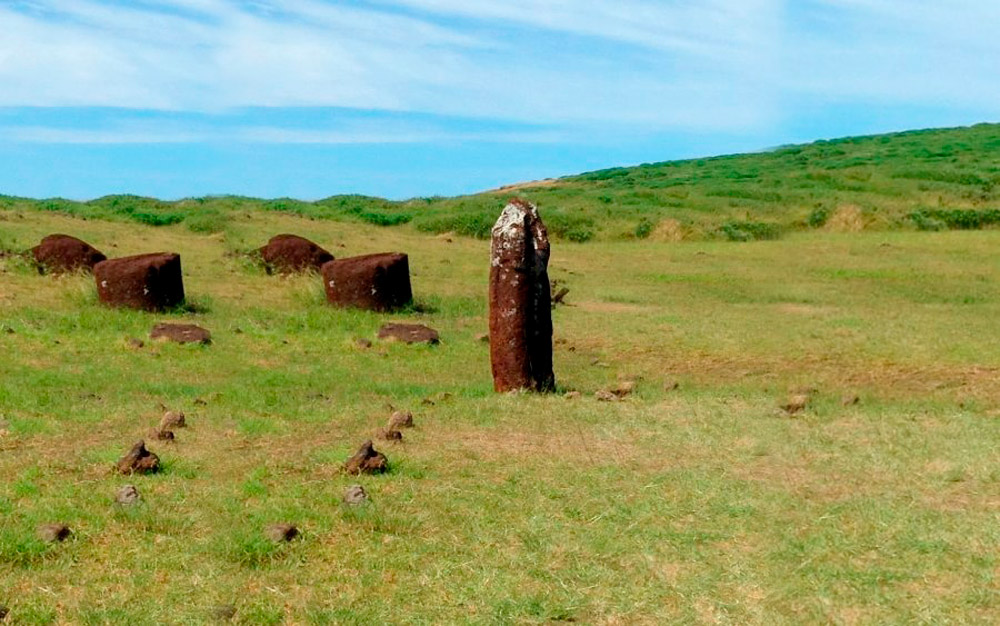 Ahu Vinapu – Most of the Moai and Ahu around the island are male in appearance, but Ahu Vinapu is home to one of the few examples of female Moai. Made of red scoria rock, which is the same type of stone used to make the pukao “top hats” seen on male Moai around the island, the female Moai resembles a column and most details have been erased by time, but archaeologists still believe it is feminine in nature. The most notable female Moai, now housed in the museum, was found near this site. 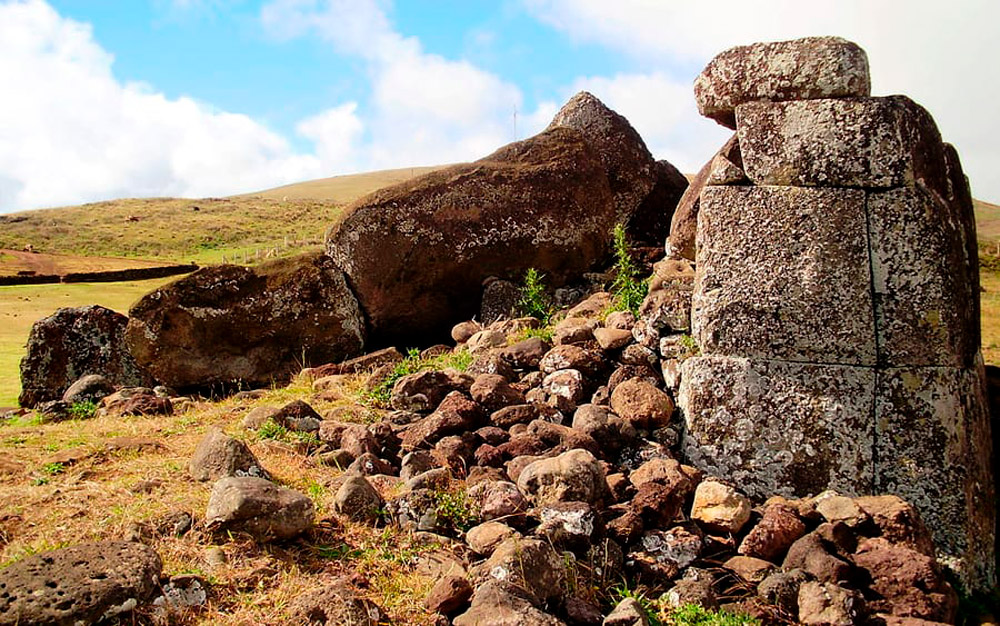 The ahu, which is part of a large ceremonial complex consisting of several ahus with downed Moai, is also important because of how the ahu was constructed. Large pieces of stone were carved and fitted together in a manner similar to how the Incans of Peru constructed their incredibly complex stone cities in places like Machu Picchu and Cuzco. Archaeologists believe these similarly “fitted stones” suggest that there was communication between the Rapa Nui people and the Incans, or, as another theory goes, that the ahu was built by the Incan emperor Tupac Yupanqui when he went on an exploratory trip of the Pacific Ocean around 1480. Several other theories exist, but as no solid evidence has yet come to light, how Ahu Vinapu was built remains one of the unsolved mysteries of Easter Island’s past.

Ahu Vinapu is just a short drive from Hanga Roa, and you can easily navigate and walk the site on your own. It’s a good idea to go with a local guide, though, to provide more background information. 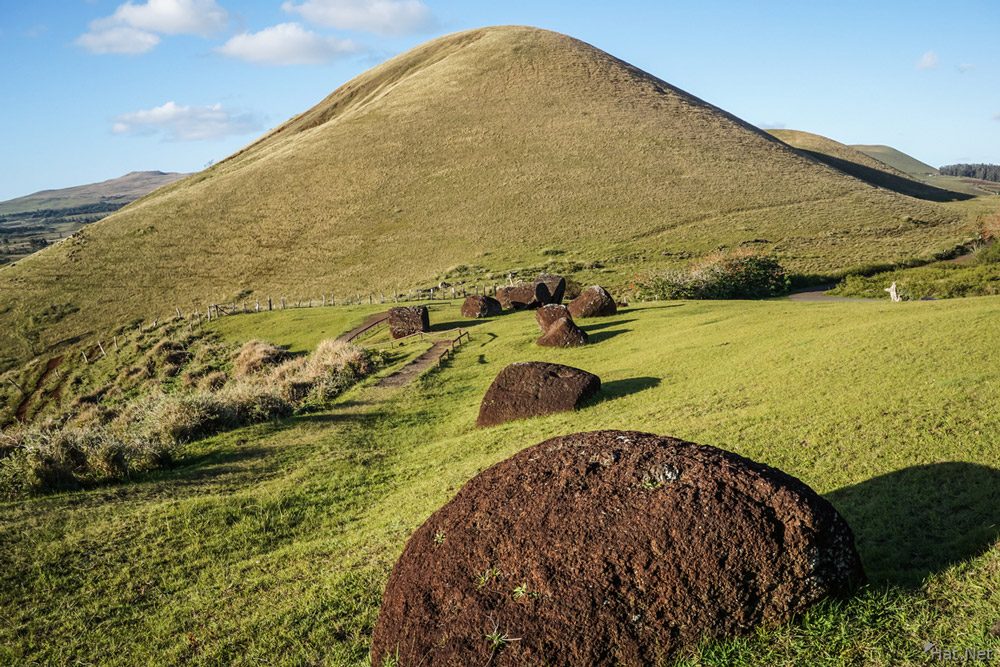 Puna Pau – While visiting sites like Ahu Tongariki, you’ll likely notice that some of the Moai are wearing hats: rounded squares of red stone with a smaller cylindrical piece on the top. These stone hats are called “pukaos” and the stone to make them came from a special place: the quarry at Puna Pau.

Located inside a small crater near Hanga Roa, Puna Pau was a rich resource of scoria, a low-density, reddish rock. Whereas most of the Moai figures were carved from tuff (a darker but also relatively soft type of volcanic rock) taken from the Rona Raraku quarry further up the island, scoria was only used to make the pukaos, Tukuturis (a different kind of sculpture from the Moai), and petroglyphs. Nowadays, the site itself is lovely, with rolling green hills dotted by burgundy-red boulders; a pathway through the hills taken you to the quarry itself. 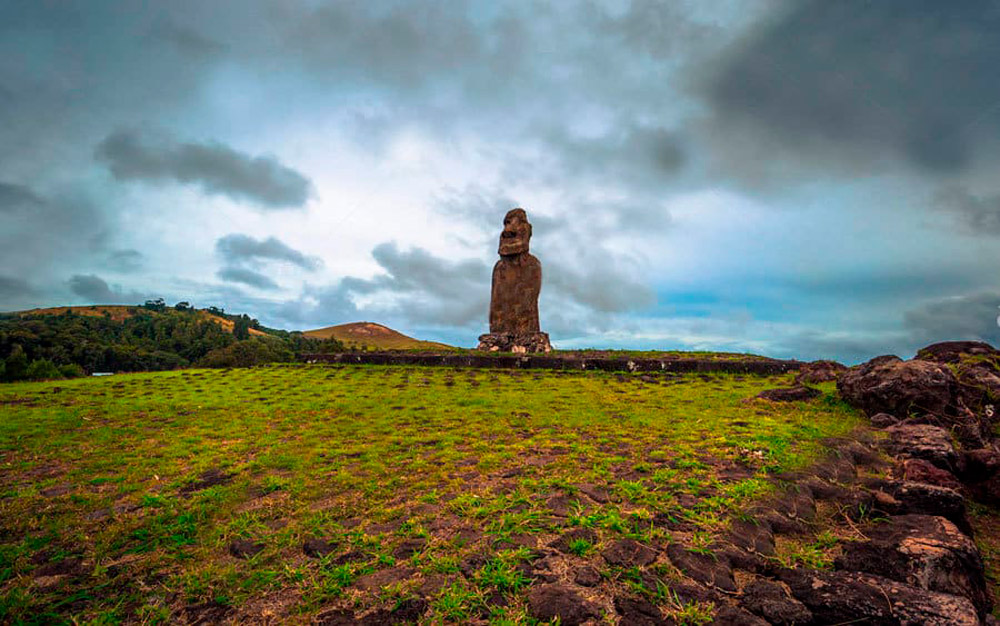 Ahu Huri A Urenga – Ancient civilizations seemed to have quite a knack for knowing the stars (perhaps even better than we do with all our modern technology), and the Rapa Nui were no exception. At the entrance of Ahu Huri A Urenga, a water well and small indentations made in the stones would collect rainwater to reflect back the stars for observation and study. It is believed that this site was vital for the Rapa Nui calendar, as solar observations taken at the site helped mark the start of seasons and even regulations (like fishing). The ahu platform and the Moai on it (which is one of the few examples of Moai with hands) also directly face the sunrise on the winter solstice. The site was also used for funerals, as there’s a crematorium located at the back of the complex. 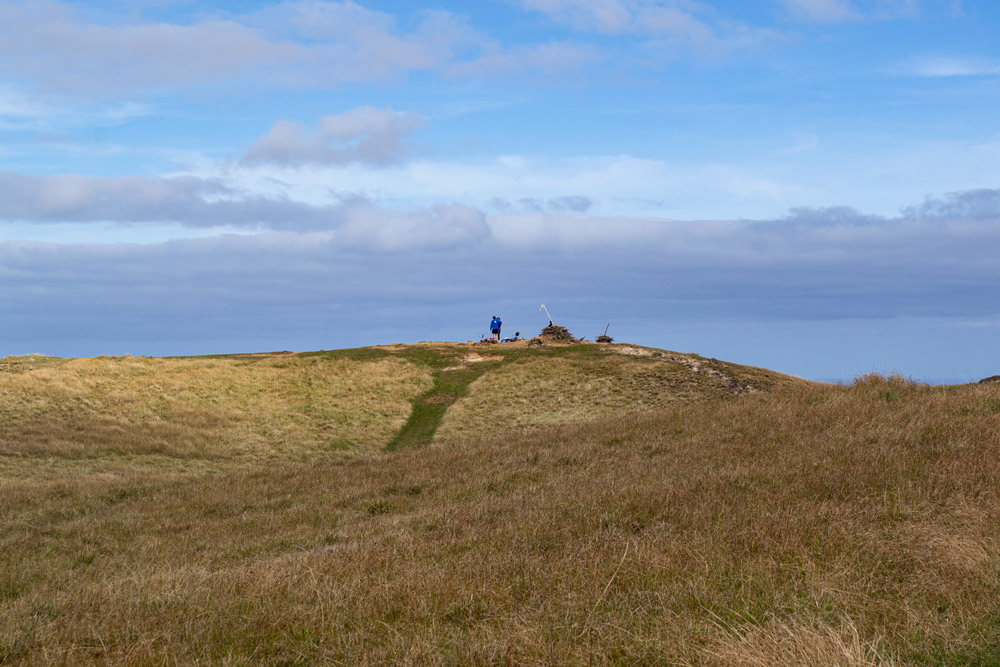 Trekking or cycling at Terevaka – Terevaka is the largest of Easter Island’s three volcanoes, and the summit offers wonderful views of the island and ocean. As such, it’s a popular place to go for a hike or for cycling. Despite being the biggest, it’s a fairly easy hike for everyone: the surrounding landscape of undulating hills with ocean views is pretty flat, and the gently-rising slopes aren’t too strenuous. 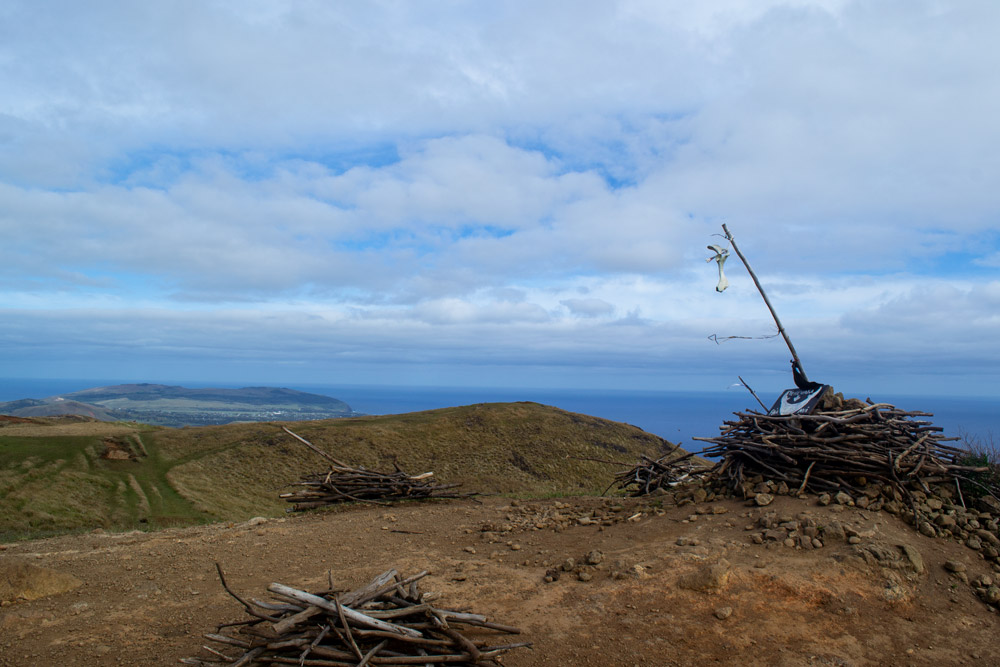 The summit can be a bit windy, but the views are worth it. Rent a bike in Hanga Roa for the day to go cycling on the trails, or just lace up your hiking shoes and start walking! 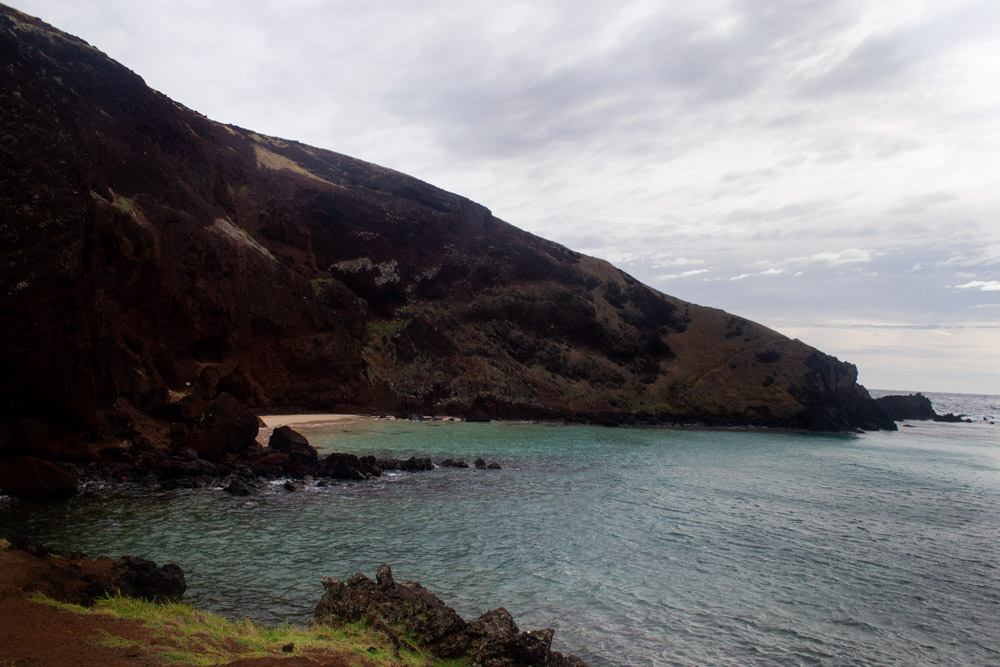 Ovahe Beach – Most people don’t go to Easter Island for adventure; aside from some light hiking, cycling, and scuba diving, the majority of visitors are here to experience the culture. But even with such a lightweight schedule, a relaxing day at the beach is always a good idea! While Anakena, the most popular beach on the island, is absolutely lovely, if you’re looking for solitude and to see a lesser-known part of the island, head to Ovahe Beach. 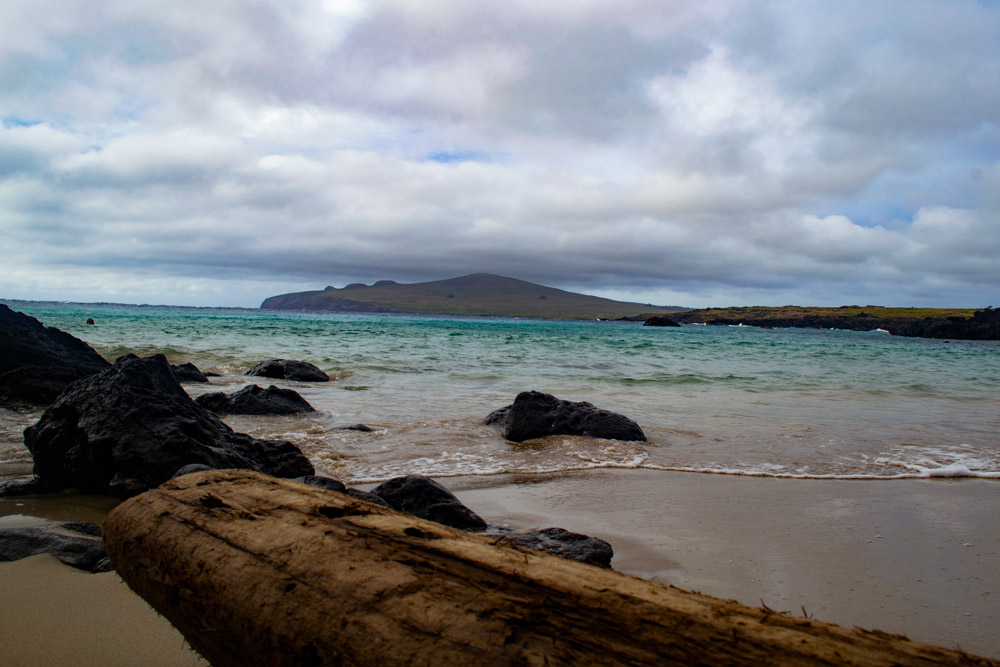 Like Anakena, Ovahe beach was also the site of an islander settlement but now it’s primarily known for its rugged beauty. The small, pink sand beach is surrounded by rocky sea cliffs, making it a perfect place for sunbathing. The warm turquoise waters are a popular spot for snorkeling, as the offshore coral reefs and rocky outcrops are frequented by native sea creatures like sea turtles and fish. However, the currents are stronger here than at Anakena and as the beach is isolated, there’s no lifeguard on duty so caution when swimming is urged. Ovahe is also one of the last refuges for native coastal flora on Easter Island, so you can see local flowers and plants.