Visiting Easter Island is one of those once-in-a-lifetime experiences; a tiny speck of land located far out in the middle of the Pacific Ocean, a trip here is a chance to go back in time and immerse yourself in a wholly unique way of life. Known as Rapa Nui in the local indigenous language, the island has become internationally famous for its Moai: immense, human-esque rock statues that are dotted around the island. The mysteries surrounding their creation and how they were moved from place to place beguiled historians and archaeologists for years, and their size and stature mean that they have to be seen to be believed. With hiking and cycling trails, idyllic weather, sweeping oceanic vistas, endless fresh seafood, and a warm and welcoming local population who are eager to share their culture, it’s one of those destinations that has to go on your bucket list.

But even though all of Easter Island is worth exploring, there’s only so much time per trip and you want to make sure you hit all the highlights, the best that Rapa Nui has to offer. From the tips of volcanoes to pristine beaches to sacred sites, these are the 6 unmissable spots to visit on Easter Island! 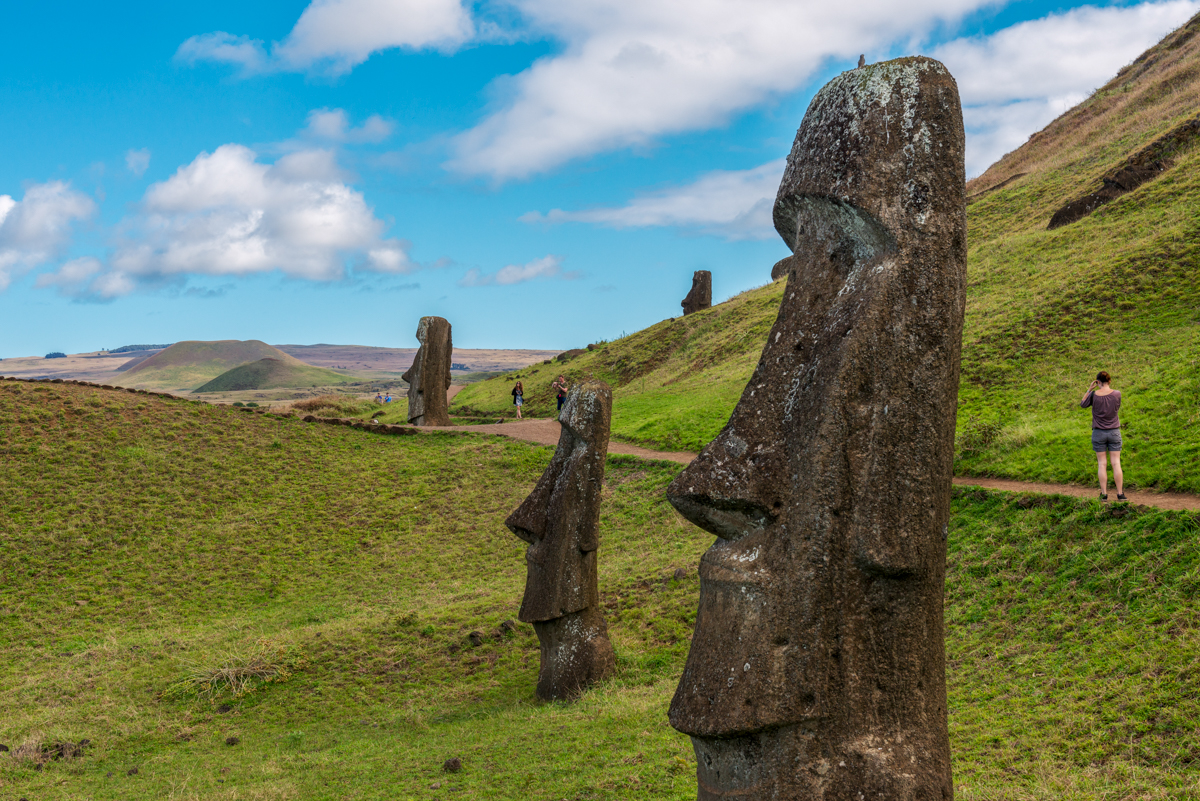 An extinct volcanic crater attached to Ma′unga Terevaka, the largest of Easter Island’s three dormant volcanoes, Rano Raraku is one of the most historically and archaeologically important sites on the entire island for one big reason: it was a Moai factory.

On the slopes of Rano Raraku, Rapa Nui islanders found a massive quarry of tuff (a type of rock made from volcanic ash). Comparatively soft and easier to carve than most other rocks, tuff was ideal for crafting Moai, so 95% of the island’s famous statues came from the Rano Raraku quarry.

Used by islanders as a source of tuff for over 500 years until the early eighteenth century, at the quarry you can see for yourself the design evolution of the Moai statues. Various incomplete Moai dot the site, as well as the surrounding hillsides. Some of the most striking differences between these Moai and the ones at sites like Ahu Tongariki include their lack of pukao tophats or the fact that several are buried up to their shoulders instead of showing the whole body. In fact, it’s actually these hillside Moai statues that are some of the most famous examples of Moai on the island: since they are buried up to the neck, it is from them that the world got the term “Easter Island Heads”, as this was before excavation revealed their subterranean bodies. With 400 Moai in and around the quarry (including one attached to the quarry wall that’s 71 feet long and weighing an estimated 200 tonnes), the discovery of Rano Raraku was key to helping the world understand how the design and creation of the Moai were carried out over time.

There are various paths running around the site that take visitors past the quarry and the “Easter Island Heads” on the hillside. You can also climb up to the rim of the crater, which now holds a freshwater lake; it’s worth the climb for the panoramic view of the island and ocean. 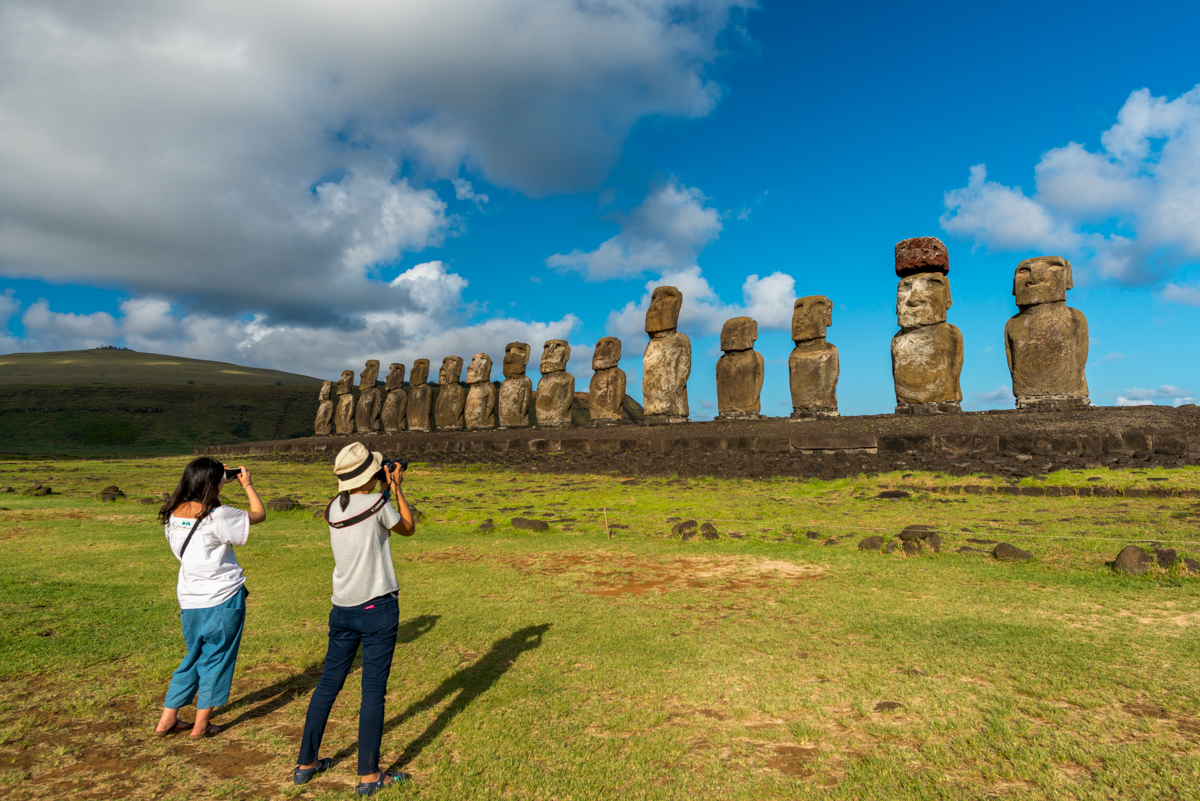 A short walk from Rano Raraku, you’ll find one of the most instantly recognizable sites of the island: the row of 15 Moai statues standing side by side with the ocean in the backdrop.

Placed on top of an ahu (a large stone platform), Ahu Tongariki is the largest ahu on Easter Island. In the past, it was the capital of Hotu Iti, an area spanning the eastern portion of the island that was governed by a clan of the same name. During the island civil wars in the late 1770s and early 1800s, the Moai were toppled off the platform (many others around the island met a similar fate). Then in 1960, an earthquake off the coast of Chile (a 9.5, the strongest ever recorded) caused a tsunami that swept the ahu and its Moai inland. It wasn’t until the 1990s that the ahu was restored to its original place and grandeur, following a five-year retrieval and renovation project.

A wonder to behold any day of the year, Ahu Tongariki is especially amazing to see during the Summer Solstice, when all the Moai face the setting sun head-on. The site is also popular for watching the sunrise over the ocean with the ahu in the foreground. 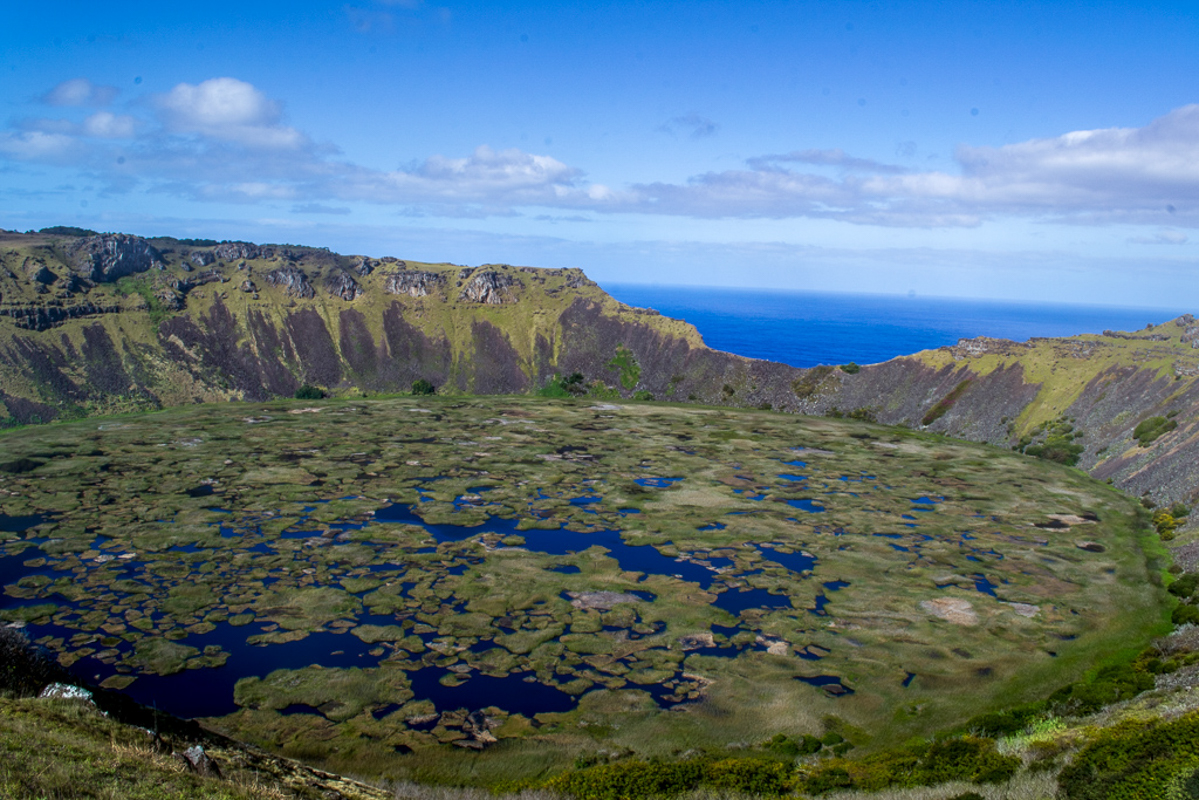 On the southwestern headland of Easter Island can be found one of the island’s most striking geographic features: the enormous crater of the Rano Kau volcano.

Rising 1,063 feet up from sea level, Rano Kau is an extinct volcanic crater (like all the other volcanoes on Easter Island), making its immense, circular crater a must-visit for views of the island, ocean, and the freshwater lake in the base of the crater. A single trail leads to the rim (a tiring but relatively easy hike), where you can take in the crater’s conical walls, the lake and surrounding vegetation, and the ocean beyond. The crater – which is more than a mile across –  is especially interesting because, thanks to the tall walls that shelter the base from winds, the crater has formed its own micro-climate; vines and figs grow especially well here. From the far end of the crater, you can also see where the outer walls of the volcano plunge down as steep sea cliffs into the Pacific Ocean.

Here, you’ll also find Orongo, a stone village that used to be an important ceremonial center. Made up of 53 circular stone houses, which were built low to the ground and without windows, Orongo was the site of one of the most spectacular and dangerous feats in Rapa Nui culture. Every year, a competition was held to bring back the first “manu tara” (sooty tern) egg of the season. The terns nested on a small island just off the coast called Motu Nui; to reach the island, contestants had to climb down the sheer volcanic sea cliffs, swim to the island, grab an egg, and then repeat the journey back up the volcano. Incredibly dangerous, many participants were killed during the race, either by falling from the cliffs, being eaten by sharks, or drowning. The man who finally emerged as the victor was dubbed the “Tangata manu” (Birdman).

Now a World Heritage Site inside Rapa Nui National Park, you can visit Orongo and see for yourself just how treacherous the race was. 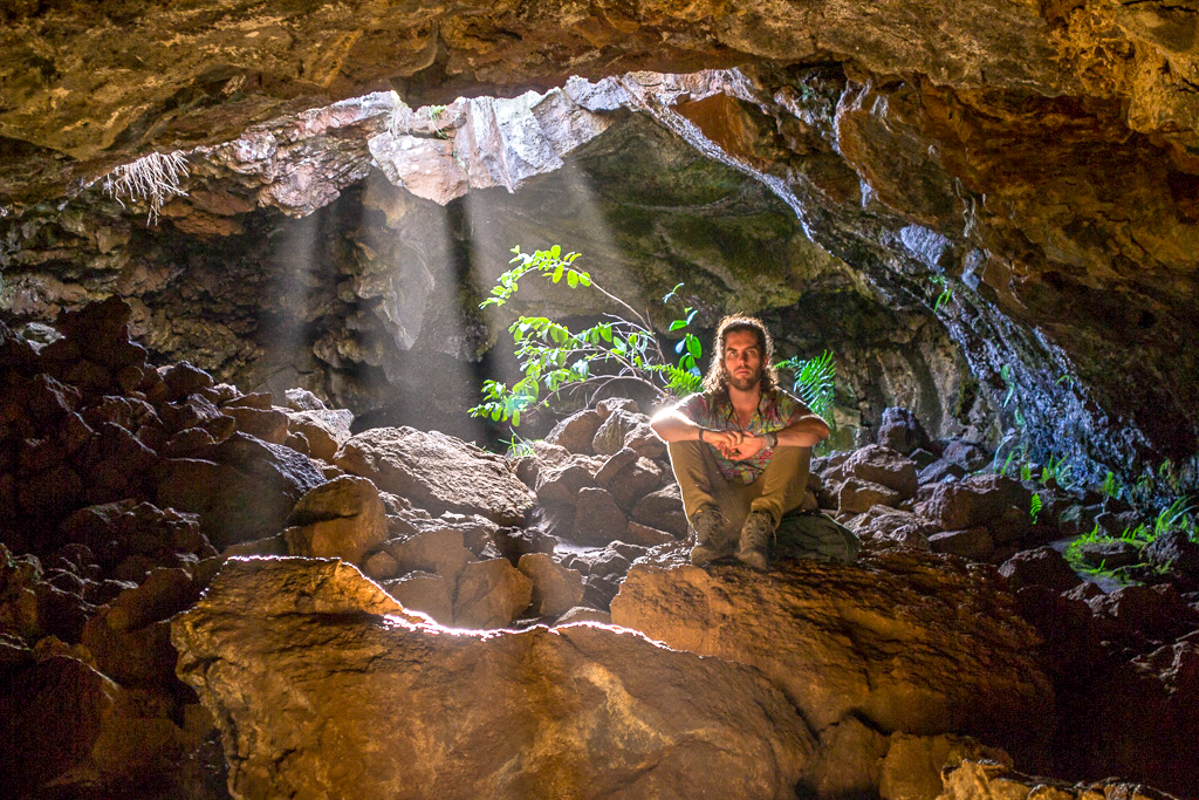 Easter Island was created more than 750,000 years ago by volcanic explosions. During its formation, flowing lava created subterranean channels all over the island, which hardened into rock and formed cavities in the earth. Ana Te Pahu (meaning “the cave of the drum”) is the largest of these volcanic caves.

Located near the base of Ma′unga Terevaka, in the past, the cave was likely used as a place of shelter, since the cave entrance is easy to access. A nearby chamber of the cave holds a water reservoir and archeologists have found evidence of ancient cooking stoves. The entrance to the cave was also surrounded by banana trees, earning Ana Te Pahu its second name “the cave of bananas”.

Visitors can explore the cave on their own, as there are rudimentary paths, but it’s recommended that they bring sturdy walking shoes and a flashlight.

Near the cave, you’ll also find one of the island’s Ahus, Ahu Akivi. Although not as well-known as Ahu Tongariki, it’s one of Rapa Nui’s most sacred sites. Erected sometime in the 16th century, the seven Moai on the ahu were believed to be the reincarnations of important leaders or kings on Easter Island, and so were built and placed facing the Pacific Ocean (instead of inland, like other ahus) as auspicious symbols of protection and luck for the clans of each Moai leader. The site was also used for astronomical observations, serving as points for precision measurement by lining up with the Spring and Autumn Equinoxes (the only Ahu on the island to do so). 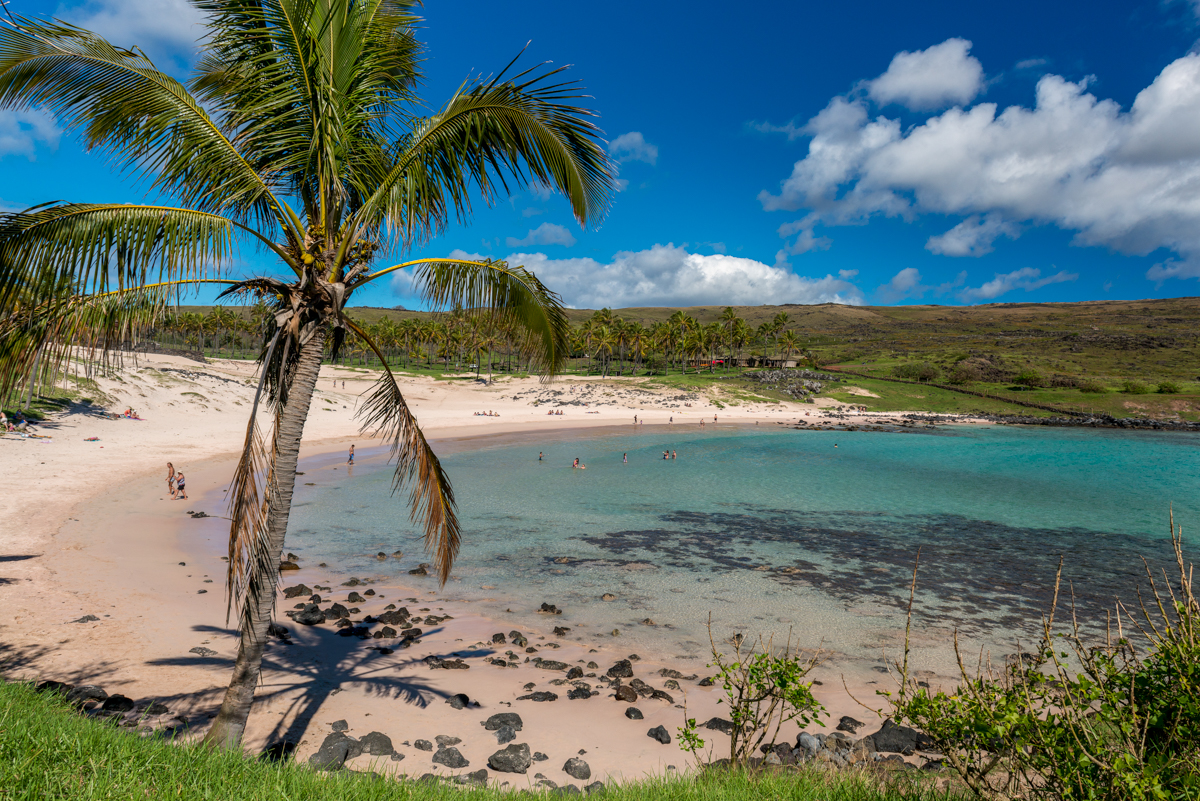 Visitors to Easter Island primarily go to discover the island’s unique history and culture. But don’t forget that Easter Island is still a tropical island in the middle of the Pacific Ocean, with lovely weather, tranquil ocean views, and sandy beaches that are perfect for days of rest and relaxation. Anakena is the island’s main beach: a protected cove of white coral beaches, turquoise water, and waving palm trees. Idyllic and isolated, it’s the perfect spot to spend a day enjoying the sun and surf after days of cultural immersion. The water stays warm enough for swimming all year round, and there are nearby restaurants, picnic areas, and facilities for day trippers from Hanga Roa (the main town on the island).

But Anakena is more than a pretty beach: it’s actually the cradle of Rapa Nui’s culture and civilization. The first king of the island, Ariki Hotu Matu’a, landed here with his tribe and established the first colony on Easter Island, and later, the beach and surrounding lands were the home of the royal Miru tribe and an important cultural center. All this is known from the many archaeological artifacts found around the beach and nearby hills, as well as two ahu. 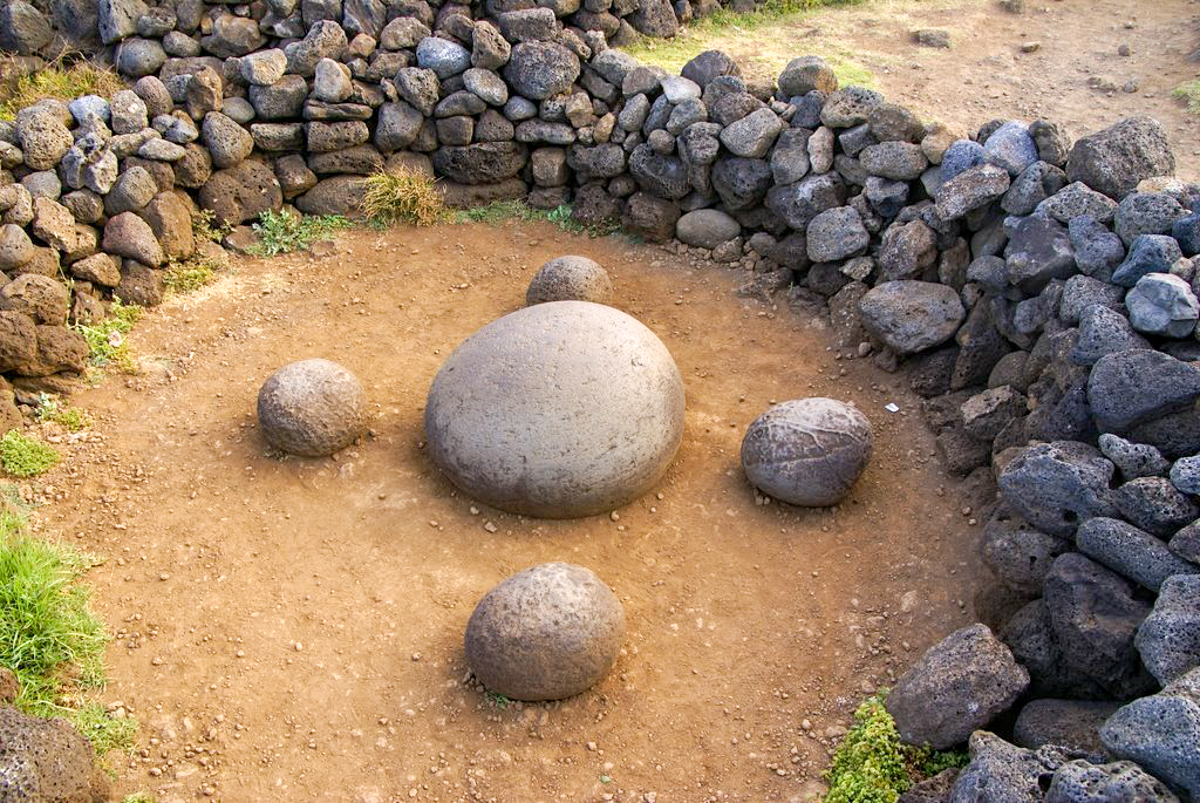 Ahu Te Pito Kura forms part of a historic complex of buildings, strategically and symbolically located at the center of the site. The ahu has only one Moai, Paro, which was pulled down and destroyed at some point in the past (it’s believed it happened in the mid-1800s). But Paro is more important because it was the largest Moai ever made and transported on Easter Island.

Made in the Rano Raraku quarry more than 8 kilometers away, moving this behemoth statue – which weighs more than 80 tons and is 32 feet long – must have been an incredibly difficult and strenuous feat. Today, Paro lies face down where he first fell, with his pukao hat a short distance in front of him.

But the site holds other treasures, like the Magentic Stone. Legend says that this large and spherical stone was brought to Easter Island by its first king Hotu Matu’a and that it possesses special energy called “mana”, which acts as a sort of magnet. This can be explained by the presence of large quantities of iron content in the stone, causing it to heat up quickly and affect nearby compasses. In the past visitors were able to place their hands on it to try and feel the energy within, but after some inappropriate behavior, it’s no longer allowed. The stone is what gives the site its name: “The Navel of the World”.